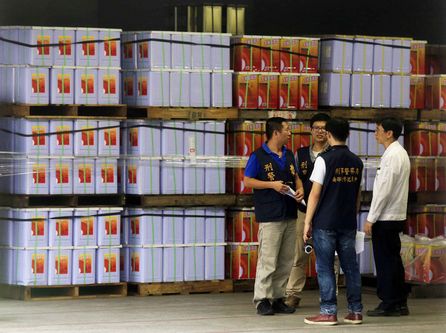 TAIPEI (Taiwan News) – The chairman and CEO of Chang Guann Co. were sentenced to 20 years in prison each and the company was fined NT$50 million (US$1.59 million) Friday for their part in the adulterated oil scandal which rocked Taiwan last year.
The company was accused of having worked substandard lard oil unfit for consumption into edible oil products, which it sold on to several food manufacturers.
Of eight individuals indicted for the scandal, Chang Guann Chairman Yeh Wen-hsiang, 60, and CEO Tai Chi-chuan, 58, were each sentenced to 20 years in prison by the Pingtung District Court. Appeals were still possible.
Kuo Lieh-cheng, the 33-year-old supplier of much of the problematic oil products, was sentenced to 12 years in prison and a fine of NT$50,000 (US$1,590) for violations of food safety laws but also for illegal possession of firearms, reports said. One of his employees received an 8-year jail sentence, while a related case against another company, Chinwei Co., had still not reached the final phase.
The Pingtung County Government’s health department had fined Kuo NT$48 million (US$1.5 million) for food safety violations, but he had not paid up yet, even after his appeal against the fine had been rejected, reports said.
According to the court, Kuo had sold tainted oil products to Chang Guann on nine occasions, while the company’s supposedly edible oil had been supplied to 173 other food manufacturers for processing in their own products.
The discovery that a variety of inedible products had been mixed into oil at the underground factory operated by Kuo caused a storm of outrage and unease about the safety of cooking oil in Taiwan, especially after it was discovered that the tainted goods had found their way into food products from major corporations and top brand names. The scandal led to tougher fines and inspections in the food sector, even though several other scandals, namely involving residues of pesticides on tea leaves, still occurred this year.