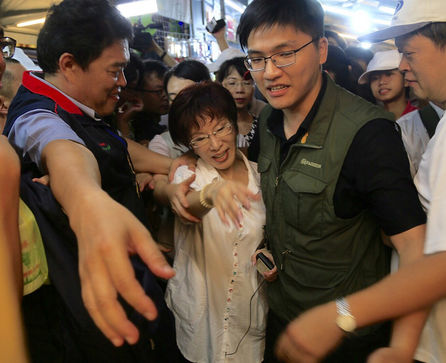 Kuomintang presidential contender Hung Hsiu-chu returned to the Yuemei village of Taichung County’s Houli Township on Thursday as part of her first leg of the campaigning tour to win support from her hometown.

“I’m back!” she screamed out loud, calling on her supporters that the daughter of the sugar field has returned.

Hung said she is forever grateful for the land she was born and raised, adding that she will not throw in the towel until the elections are over.

The KMT candidate was also joined by next year’s legislative runners, including Yang Chung-ying, Yen Kuan-heng, Lai Yi-huang, Yen Chiu-yue, Shen Chih-hwei, and among several others.

Hung was warmly received by local supporters as she took to the street of a place that she remembered vividly growing up.

During the visit, she received pineapples and rice dumplings from local villagers as tokens of good faith, who also urged Hung to never give up when the going gets tough.

“I will march on with perseverance,” she replied in response from their encouragement.

Hung’s father moved to Taiwan with the Nationalist Government and became deputy manager of a sugar factory under the Taiwan Sugar Corporation.

Penghu-born artist Chen Hung-min also presented a song to Hung in commemoration of her deceased father.