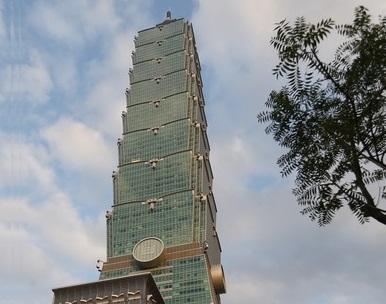 TAIPEI (Taiwan News) – A drone which hit Taipei 101 was guided by a tourist from China in an incident which provoked concern about national security and terrorism, reports said Wednesday.
Around 10 o’clock Tuesday morning, an unmanned drone carrying a camera smashed into Taiwan’s tallest building, reports said. As a security guard found the damaged object near Songzhi Road, a man came running and said the drone was his. The man reportedly presented himself as Yang, a 28-year-old visitor from China.
He said he was staying at an adjacent five-star hotel. Because the skies were clear, he had gone to nearby Songshou Park to launch his drone, reports said.
However, operating the unmanned flying object around the tower buildings had been too difficult and as a result, it smashed into Taipei 101 unintentionally, he reportedly told the security guard.
Taipei 101 management informed Xinyi Precinct police, which reportedly interviewed Yang and let him go after returning the leftovers of the drone to him. A Taipei 101 spokesman said that on average, three drones hit the building each month. A complete investigation into the latest incident would have to show whether there had been any significant damages to the tower and whether Yang would have to pay compensation, reports said.
He appeared at a police station Wednesday evening to answer questions about the event, reports said. Officers wanted to look at his cell phone and its SIM card, but the latter was still at his hotel, leading police to question his motives, reports said. Investigators reportedly wanted to find out whether he had used the drone at any other locations in Taiwan, while representatives of the Aviation Safety Council were also looking at his actions.
Yang had arrived in Taiwan as an independent traveler for a 10-day period beginning July 20, according to media reports.
The incident comes amid fears about public safety and national security. A drone out of control could easily have crashed and injured passersby below, observers said, while other commentators said the unmanned miniature aircraft could be used by Chinese visitors to spy on sensitive areas and even military installations.