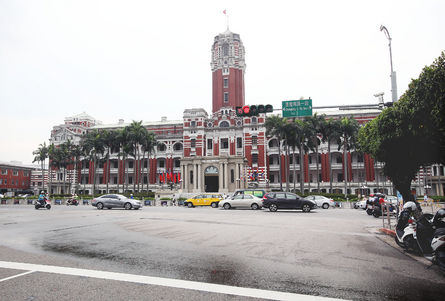 TAIPEI (Taiwan News) – A structure looking similar to the Presidential Office Building in Taipei appeared in a China television report about military drills in Inner Mongolia, reports said Wednesday.
The uncanny resemblance led to speculation that the “Stride 2015 Zhurihe” exercises included a simulation of an invasion of Taiwan by the People’s Liberation Army.
Since June, Chinese army units divided into “red” and “blue” units have been battling each other in simulations based around the Inner Mongolian town of Zhurihe.
A report shown on China’s CCTV on July 5 showed a target in the shape of a five-story-tall structure with a high red-brick tower, similar to Taiwan’s Presidential Office Building. The “red” forces, which in Chinese drills represent the PLA, attacked the building, which was being defended by the “blue” forces, the color of the enemy, as opposed to maneuvers in Taiwan where the blues represent the positive and the reds the enemy.
The island’s Ministry of National Defense said neither the people of Taiwan nor international society could accept the fact that the drills were so clearly directed against the Presidential Office.
According to the CCTV report, the military had set up conditions in the Zhurihe region which simulated an environment for urban warfare. The report did not mention Taipei or Taiwan, though it said the “red” forces won thanks to several factors such as the use of drones to collect visual information about the position of enemy commanders and other vital data.
The exercises might have been an example of “how to resolve the Taiwan issue through force,” commentators said. China has threatened military force to “unify” the island if it moved to declare independence.
The Presidential Office Building has been mentioned in the local media before as a possible target for enemy Air Force action, including a “beheading” by abducting or killing Taiwan’s president.