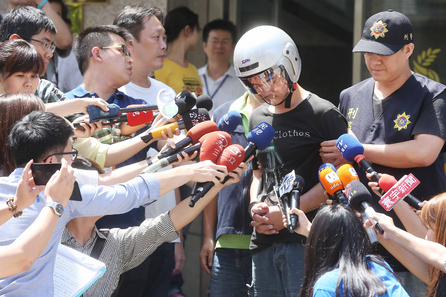 TAIPEI (Taiwan News) – The Shilin District Court approved the detention request Tuesday for Kuo Yen-chun, the 27-year-old man accused of stabbing four random passengers at Taipei’s Zhongshan Mass Rapid Transit station the evening before.
The attack was reminiscent of an incident on May 21 last year during which four people were killed and 24 injured when student Cheng Chieh stabbed passengers at random.
Kuo was unemployed and said he was dissatisfied with the state of society, reports said. He had an unstable family background and was angry after a quarrel with his grandmother who had raised him. He launched the attack on his 27th birthday.
Kuo reportedly appeared at Zhongshan MRT station just before 9 p.m. Tuesday where he randomly attacked passersby with a knife he had just stolen from a shop.
MRT security guards, staff, and at least one member of the public banded together to overpower him. The four injured passengers were taken to a nearby hospital but none was wounded seriously, reports said.
Kuo said he just wanted to kill people, according to media reports, leading to the Shilin District Prosecutors Office to request the local court to order him detained. The demand was likely to be approved because it usually is in the case of violent criminals, reports said.
The court did announce just before 6 p.m. Tuesday that it had given prosecutors the green light for Kuo’s detention. They had argued he was involved in a serious crime, posed a flight risk and might well attack more people.
Taipei City Mayor Ko Wen-je said in the wake of the incident that more thinking was necessary about how to identify, track and advise social cases like Kuo. “Paying attention to other people amounts to protecting oneself,” he reportedly said. He named “zhainan” or “otaku,” mostly younger men who spent most of their time at home online isolated from the outside world as a particular group worth watching, reports said.
Police patrols at six key MRT stations were stepped up Tuesday, focusing on areas crowded by peak-time commuters and by passengers changing between different train lines.
Officials said Kuo had been rapidly overpowered thanks to measures introduced after last year’s stabbing on a Bannan Line train between Longshan Temple and Jiangzicui MRT stations.