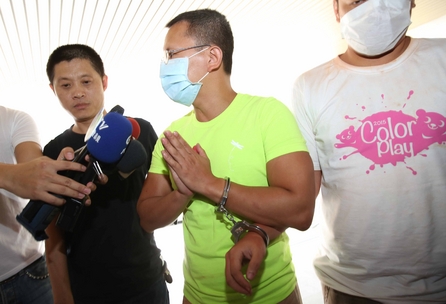 TAIPEI (Taiwan News) – The organizer of the color powder event which left seven people dead and almost 500 injured denied accusations Friday that he had hidden all his assets in order to evade responsibility.
After New Taipei City, where the June 27 disaster happened, won court approval for provisional attachments to the assets of Play Color Co. owner Lu Chung-chi, the authorities found he had no bank accounts and only credit card debts. He was immediately suspected of having moved all his assets away so the government would be unable to win compensation for the victims.
After attorneys for the New Taipei City Government asked prosecutors Friday morning to apply for Lu’s detention, the beleaguered event organizer delivered a statement to reporters again denying any attempt at evading responsibility.
He said that in addition to helping investigators with their inquiries and helping the victims’ relatives and society at large to understand, he might come out and provide explanations himself.
Lu said his personal account had been empty since February last year, which had nothing to do with the disaster at the Formosa Fun Coast water park in New Taipei City’s Bali District. According to Lu, he used company bank accounts for most of his businesses, and had not made any major transfers since the incident.
Lu’s statements mentioned sums of almost NT$800,000 (US$25,700) in ticket revenue and NT$33 million (US$1 million) negotiated over with the insurance company the day after the disaster. The event organizer said he had never tried to move or hide any money from the authorities.
Provisional attachments were also issued on the assets of co-organizer Juibo International Marketing Co. owner Chou Hung-wei and of water park chairman Chen Po-ting, who was barred from leaving the country.