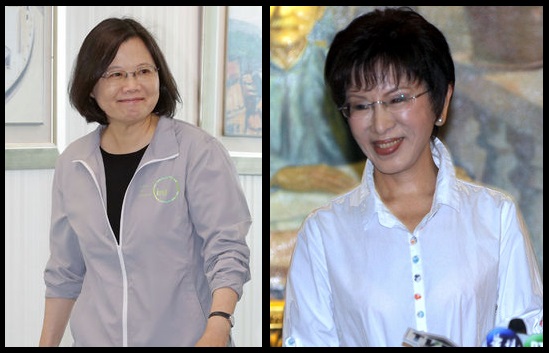 TAIPEI (Taiwan News) – If the presidential election were held now, Kuomintang contender Hung Hsiu-chu would finish third behind Democratic Progressive Party Chairwoman Tsai Ing-wen and People First Party Chairman James Soong, according to a new opinion poll published Friday.
The KMT is expected to confirm Hung’s nomination at a congress this Sunday, while Soong has said he would wait until the July 19 event to announce his decision, though he is widely expected to run.
According to a new survey by the Taiwan Brain Trust, Tsai would win 46.5 percent of the vote if she had to face down both candidates from the “blue” camp. Soong would receive 23.6 percent and Hung would finish last with 17 percent.
If the PFP leader decided not to join the race, Tsai would win with 54.3 percent against 21.3 percent for Hung.
However, if for some reason the KMT candidate dropped out, Tsai would still finish far ahead with 52.3 percent against 29.3 percent for Soong.
Taiwan Brain Trust polling center chief Hsu Yung-ming deduced that whether or not Soong participated in the January 16 presidential election was unlikely to influence the final outcome, but it could introduce a new element in that it could redraw the map of Taiwan’s party-political alignments.
There are legislative elections on the same day as the presidential vote, and the DPP’s aim is to achieve an absolute majority of legislative seats for itself and its allies, which would be a historic first. Even when the DPP’s Chen Shui-bian was president from 2000 to 2008, his party never managed to control a stable majority at the Legislative Yuan.
Over the past month, Hung’s popularity dipped by 10 percent, Hsu said, though the fall did not benefit Tsai directly, but only led to an increase in the number of undecided voters. It would remain to be seen whether the KMT congress would succeed in winning back previous supporters, Hsu said.
Hung’s “One China, the Same Interpretation” statement first made in May cost her a serious loss of support, analysts said, with the Taiwan Brain Trust poll showing only 17.8 percent of the public agreed with her vision, while 61.2 percent rejected the concept.
Over the past few days, the KMT also expelled five prominent present and former elected office holders in what was seen as an attempt to close ranks behind the government and behind Hung, the legislative vice speaker who unexpectedly became the only contender to survive the party’s internal candidate selection process.