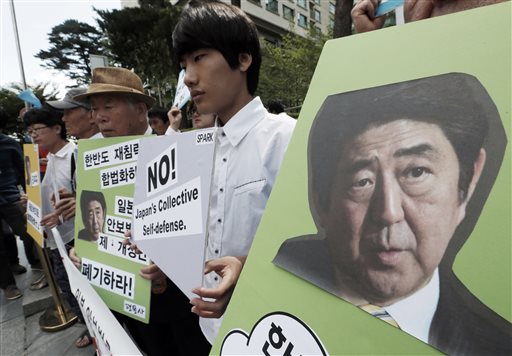 TOKYO (AP) — As opposition lawmakers walked out in protest, Japan's lower house of parliament approved legislation on Thursday that sharply changes the country's postwar defense policy by allowing an expanded role for the military.

The vote came one day after Prime Minster Shinzo Abe's ruling bloc forced the bills through a committee despite protests both inside and outside parliament.

On Thursday, hundreds of protesters outside the building chanted anti-war and anti-Abe slogans during the debate and vote, some holding banners reading, "No to war legislation!"

Abe has long wanted to remove restrictions on Japan's military in the U.S.-drafted post-World War II constitution. He says the military's role should be strengthened to counter China's growing presence in the region, contribute to international peacekeeping, and prepare for new types of threats such as terrorist attacks.

"The legislation is absolutely necessary in order to protect the lives of the Japanese people and prevent the risk of war," Abe told reporters after the vote. "The security environment surrounding Japan is becoming increasingly harsh."

Opponents say the legislation brings greater risks to Japan and violates the constitution, which renounces war "as a sovereign right of the nation and the threat or use of force as means of settling international disputes."

Opposition lawmakers walked out after their party leaders delivered speeches against the bills. Abe's ruling Liberal Democratic Party and its partner Komei party easily passed the legislation despite the boycott since they control two-thirds of the 475 seats in the lower house.

The legislation allows the military, called the Self-Defense Forces, to defend the U.S. and other countries if they come under attack, even if Japan is not.

Opponents say the conditions for involvement are overly vague, giving future governments too much leeway to interpret them as they see fit. They also criticize the forced vote by the ruling bloc as tyranny by the majority.

Polls show about 80 percent of Japanese oppose the bills and the majority believe the legislation is unconstitutional.

Abe has wanted to revise the charter but lacks public support to do so, and instead has reinterpreted the war-renouncing article and crafted the legislation to fit the reinterpretation.

He acknowledged Thursday that the legislation was unpopular and said his party will make an all-out effort to explain it "to help deepen understanding of the people."

The vote was also monitored closely outside Japan.

In Beijing, Foreign Ministry spokeswoman Hua Chunying urged Japan to stick to its pacifist principles and cautioned against interfering with China's territorial and security interests.

"It is fully justified to ask if Japan is going to give up its exclusively defense-oriented policy or change the path of peaceful development that has been long pursued after the Second World War," Hua said. She urged Japan to "refrain from jeopardizing China's sovereignty and security interests or crippling regional peace and stability."