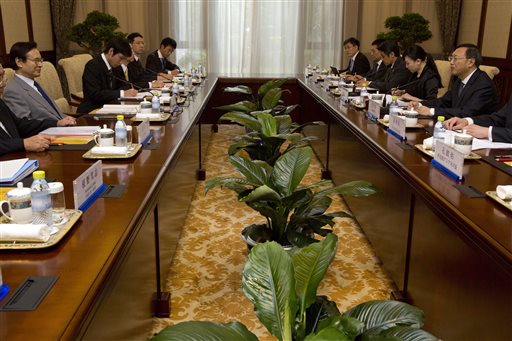 BEIJING (AP) — China's top diplomat met Thursday with the head of Japan's National Security Council for talks expected to touch on a possible summit between the leaders of the countries later this year in Beijing.

The meeting between Chinese State Councilor Yang Jiechi and Shotaro Yachi, a career diplomat and a close aide to Japanese Prime Minister Shinzo Abe, comes at a delicate time for relations between the neighboring Asian powers.

The two governments are at odds in a sovereignty dispute over potentially resource-rich islands in the Pacific, though there have been some halting steps toward easing tensions over the past year, with at least two brief encounters between Abe and Chinese President Xi Jinping.

Adding to the animosity is what the Chinese see as Japan's failure to sufficiently atone for the suffering it caused during World War II, a major theme in China as the 70th anniversary of the end of the war nears.

During the meeting, Yang told Yachi that the bilateral relationship remains complex and sensitive and that Beijing hopes the two countries can learn from history and prepare for the future.

Yachi commented that the relationship has been improving and that Thursday's meeting would "play as an important channel" between Beijing and Tokyo.

China has invited Abe to a military parade on Sept. 3 to mark the Japanese surrender in the Pacific. Abe has said that he is considering a visit either before or after the parade day.