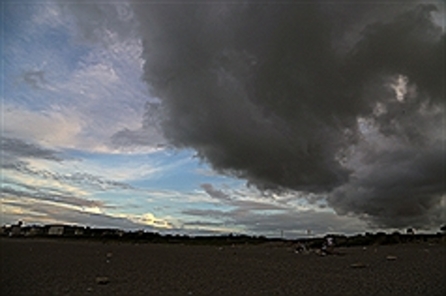 TAIPEI (Taiwan News) – Offices and schools will be closed Friday in the cities of Taipei, New Taipei, Keelung and Taoyuan and on the island of Matsu amid the expected onslaught of Typhoon Chan-hom, local governments said.
Land warnings were issued earlier in the evening by the Central Weather Bureau for the area. Key examinations scheduled for July 11-15 were postponed and one university student went missing off Green Island in Taitung County after being swept away by waves, reports said. The stockmarket will also be closed Friday.
Just hours before the decision about the typhoon holiday, the bureau issued the land warnings for Taipei, New Taipei, Keelung, Yilan and Taoyuan. It also added special rain warnings for the counties of Hsinchu, Miaoli and Nantou as well as Taichung City.
Friday was supposed to be the worst day for rain and wind, especially during the afternoon and in the northern part of the country, but even Saturday and Sunday would still see bad weather.
Most regions in the central and southern part of the island, south from Hsinchu City and County and including Taichung, Nantou, Kaohsiung and Tainan as well as the island county of Penghu had declared the normal functioning of offices and schools earlier in the evening.
At 8 p.m. Thursday, the eye of Chan-hom had arrived at a spot 640 kilometers east of Taipei and was moving at a speed of 24 km per hour slowing down to 19 km toward the northwest.
Sustained winds were growing stronger to reach a maximum speed of 155 km per hour, with gusts of 191 km per hour, according to the bureau.
Travelers were advised to call ahead to learn about changes to scheduling. Several flights planned for Friday between Taiwan’s main island on the one hand and the smaller islands, Hong Kong and Japan’s Ryukyu Islands on the other hand were canceled, while some flights to China were rescheduled to earlier times Friday morning, reports said.
Ferry services between Taiwan and smaller islands were suspended, while several amusement parks and festivals were temporarily closed.
The typhoon was expected to head toward the Shanghai area on Saturday and to move on to the Korean peninsula later on.