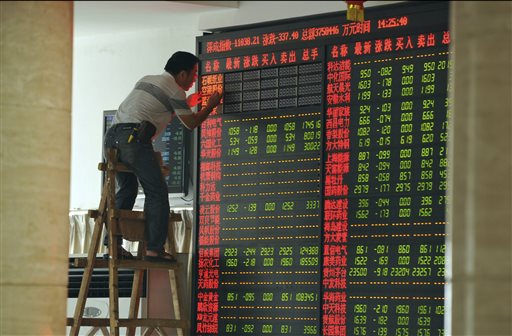 NEW YORK (AP) — Chinese officials are scrambling to stop a plunge in the country's stock market, shutting down half of its market from skittish investors and forcing brokerages to pony up billions to prop up shares.

The Shanghai composite lost another 5.9 percent Wednesday and is now down more than 30 percent since peaking June 12.

The impact on Chinese investors is direct, but for investors in the U.S., Europe and elsewhere, it's not as simple. China's market is largely isolated from other world exchanges, but there are worries the financial damage could hurt the broader Chinese economy, which is the second-largest in the world.

Here's what has happened:

HOW DID THE BUBBLE BEGIN?

There have been signs of overheating in China for a while. Shares in Shanghai more than doubled over the past year, despite evidence the Chinese economy is slowing. Chinese economic growth fell to 7 percent from January through March, the slowest quarter since 2009. At the same time, state-owned media has encouraged ordinary Chinese for months to load up on shares. Many borrowed heavily to buy stocks, taking out so-called margin loans.

Rising stocks encouraged companies to raise money by issuing shares and to use the proceeds to pay down debt. In the first half of the year, the Shanghai stock market led the world in initial public offerings: 78 companies issued shares in Shanghai, raising $16.6 billion, according to a study by the accounting firm EY. Hong Kong was No. 2 with 31 deals that raised $16 billion. Shenzhen was No. 5 with 112 deals that raised $7 billion.

Now analysts say the flood of new shares is overwhelming the market and helping to push prices down. Moreover, the government began to worry the market had reached dangerous levels, and Chinese regulators have started to tighten rules on margin lending.

WHAT HAS THE CHINESE GOVERNMENT DONE TO CONTAIN THE ISSUE?

After hitting a peak last month, Chinese stocks have been in free-fall. Originally, investors in China and abroad treated the selling as a much-needed release from a market that had soared 150 percent over the past year.

As the losses have deepened, though, worries have increased and officials have taken direct action to stem the selling. Over the weekend, 21 Chinese brokerage companies announced they would create a $19 billion "market stabilization" fund, and would continue to buy Chinese stocks. Any companies who were going to go public suspended their plans.

The selling continued, so Chinese officials announced that major shareholders in companies and executives were banned from selling their holdings for six months.

HAS THAT SLOWED THE SELLING?

It's actually made things worse. The selling has not stopped, and now it is affecting Asian markets like Hong Kong and Japan. U.S. stocks also fell sharply Wednesday.

Most anxiety-ridden investors have turned to purging stocks that act as a proxy or have direct exposure to China, with most of the damage happening in Hong Kong. The territory's Hang Seng index dropped 5.8 percent Wednesday, its worst one-day drop since the financial crisis. The Hang Seng China Enterprise Index, which is an index of so called "H-Share" companies, or mainland Chinese companies that trade in Shanghai and Shenzhen as well as Hong Kong, fell 6.1 percent.

ISN'T CHINA'S ECONOMY HUGE? SHOULD I BE WORRIED?

The lack of access has made it difficult for investors, including U.S. fund managers, to get exposure to the Chinese stock market.

For example MSCI, a company which publishes stock indexes, made a decision last month not to include Chinese "A'' shares, or stocks traded on the mainland, in its global indexes. MSCI largely cited the lack of access for foreign investors to China's market as the reason to continue to keep China out of its indexes.

DO I OWN CHINESE STOCKS?

If you have a 401(k), there's a good chance you have a few. Target-date mutual funds have become a popular way to save for retirement because they take care of how to invest a nest egg, and most hold some Chinese stocks. The percentages, though, are small. The largest target-date mutual funds built for people hoping to retire in 2030, for example, generally have less than 3 percent of their portfolios in Chinese stocks. You likely have more exposure if you own a fund that focuses on emerging-market stocks. It's been a popular area, with more than $13 billion flowing in this year, and Chinese stocks can make up about a quarter of these types of funds.

HOW MUCH MONEY HAS BEEN PULLED OUT?

Even though U.S. investors have limited exposure to China's market, there is still money there. Institutional investors have pulled $22 billion out of Chinese stock funds this year, according to EPFR Global.

"Institutional investors have been taking money off the table most of this year and part of last year," said Cameron Brandt, director of research at EPFR Global, which tracks fund flows around the world. "My sense is that they've been expecting something ugly from this retail frenzy that has been driving Chinese markets."

IS THERE A POINT WHERE I SHOULD GET WORRIED?

The biggest concern is whether the drop in China's stock market will cause the country's economy to slow. Many U.S. and European companies do business in China, and a weaker Chinese economy could result in lower sales and profits for them. Regarding this question, it's frankly too soon to tell.