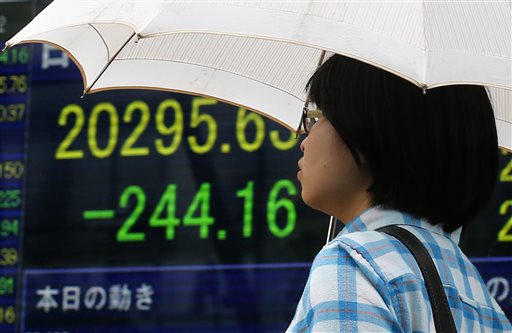 TOKYO (AP) — Asian markets mostly fell Monday as investors reacted to Greece's sound rejection of terms set by its international creditors, deepening uncertainties over its status as a member of the 19-nation eurozone. But Chinese shares rebounded after heavy losses last week.

The initial response to Sunday's Greek referendum was negative but not panicked; Greece's debt woes have long overshadowed the markets.

But mainland Chinese shares jumped, recovering from their recent swoon after 28 companies agreed to postpone planned initial public offerings and brokerages pledged more than $19 billion for a fund to stabilize the free-falling market.

The Shanghai Composite index surged nearly 6 percent after the market opened and was trading 4.4 percent higher at 3,847.34. The Chinese securities companies say they will continue to invest in the market as long the Shanghai Composite, China's equivalent of the Standard & Poor's 500 index, remains below 4,500. It closed at 3,686 on Friday.

Economists said the markets were not expecting such a decisive "no" vote and that could send stocks downward on Monday and propel investors toward so-called "safe havens" such as U.S. Treasuries or other government bonds that are viewed as largely protected from market turbulence.

"The result was clearly a more decisive 'no' than the polls had suggested," said Pavel Molchanov, equity research analyst at Raymond James. "This couldn't be more bearish for equities and commodities alike."

"The 'Greferendum' has turned out to be a 'Grief-erendum' at many levels," analysts at Japan's Mizuho Bank said in a commentary.

Greece and its creditors are expected to try to restart negotiations on a financial rescue package for the country, but it is unclear what scope there is for compromise.

Still, the markets will likely be helped by the fact that the European economy and European banks are in much stronger shape than they were in 2010, said Paul Christopher, global market strategist for Wells Fargo in St. Louis, Missouri.

"We think the market reaction is likely to be sharp at first but then reverse higher in the coming weeks, as long as Eurozone policymakers respond in a proactive way," he said.

Elsewhere in the Asia-Pacific, Australia's ASX S&P 200 fell 1.4 percent to 5,459.60 and New Zealand's benchmark slipped 0.8 percent to 5,794.73. Shares were lower in Taiwan, Singapore and Malaysia and were expected to take a hit across Asia and beyond.

Wall Street looked likely to have a rough start after the Independence Day holiday on Friday, with Dow futures down 1.1 percent and S&P futures 1.2 percent lower. The Dow fell 0.2 percent on Thursday to 17,730.11 while the Standard & Poors index was little changed at 2,076.78.

A summit of euro zone leaders was due Tuesday to discuss next steps. While Greece's economy is relatively small, the vote could result in it abandoning the euro if the country must issue its own currency to alleviate a cash crunch.

The win of the "no" vote puts Greece in uncharted waters and markedly increases the risks of the country falling out of the 19-country euro currency union.

"It's going to be an ugly day for the markets," predicted Kathy Lien, managing director of FX Strategy for BK Asset Management. She said investors will likely be conservative going into the July 20 European Central Bank payment deadline. "This means more weakness for the euro and major demand for safe haven currencies."

Peter Chatwell, senior rates strategist at Mizuho International in London, said the vote could spur investors to focus on safer bets for the time being.

"The strength of the 'No' vote in the Greek referendum comes as a shock to the market, and all safe haven trades should benefit," Chatwell wrote in a client note.

Oil prices fell, with benchmark U.S. crude tumbling $1.81 to $55.10 a barrel in electronic trading on the New York Mercantile Exchange. The contract fell 3 cents to close at $56.93 a barrel on Thursday. Brent crude, a benchmark for international oils used by many U.S. refineries, fell 49 cents to $59.83 a barrel in London.