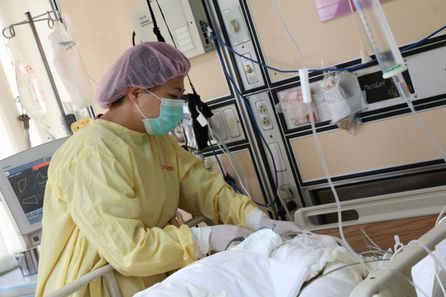 TAIPEI (Taiwan News) – Japanese doctors could arrive in Taiwan from July 9 to assist the treatment of victims of the water park blaze after medical associations from both countries sign a memorandum, reports said Saturday.
Offers by Japanese surgeons to come to Taiwan to help were initially rejected, causing a public outrage. According to existing legislation, foreign doctors are not allowed to work in prominent positions in Taiwan and can only assist or advise.
Almost 500 people were injured and two died after colored cornstarch powder exploded at the Formosa Fun Coast water park in New Taipei City on June 27. According to the latest data, the number of patients in critical condition has risen to 230, with some doctors predicting a high likelihood of more victims passing away over the next few days.
The Ministry of Health and Welfare said that if the Japanese medical association signed a memorandum with its Taiwanese counterpart just like it had done with the United States, Taiwan could accept Japanese medical staff coming over and performing low-level medical tasks under the guidance of local personnel.
Japanese doctors who visited Taiwan on July 2 offered to send over 10 surgeons and 50 nurses with an unlimited supply of artificial skin. A similar offer was made, but in the other direction, after the March 11, 2011 earthquake and tsunami, but Japanese law also did not allow foreign medical staff to work there. The problem reportedly led to fresh thinking which would allow more flexibility in the case of major disasters.
The exchange of the memorandums is likely to begin Sunday, with the first actual arrival of Japanese medical staff in Taiwan to take place on July 9 or 10, reports said.