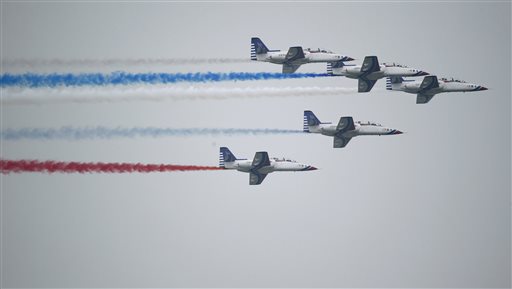 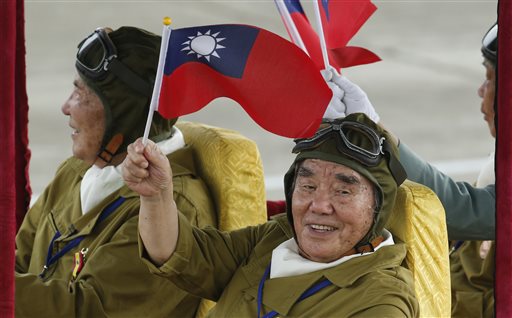 TAIPEI, Taiwan (AP) — Taiwan marched out thousands of troops and displayed its most modern military hardware Saturday to spotlight an old but often forgotten claim that its forces, not the Chinese Communists, led the campaign that routed imperial Japan from China 70 years ago.

The military staged an unusually large two-hour parade of homegrown missiles, Apache attack helicopters and a mountain bike team designed for stealth missions, followed by awards for aged World War II veterans in their attire from the 1940s.

China and Taiwan split during civil war in 1949 and today's China — more militarily and economically powerful than Taiwan — claims that the Chinese Communists had directed the resistance against the Japanese. Mainland officials have argued that the Communists' advice and fighting skills were crucial to the victory.

Taiwan's Nationalist Party ruled all of China when Japan invaded parts of the country from 1931, forming a central stage of the Asian World War II theater. In one attack, the Japanese massacred between 40,000 and 300,000 Chinese in what has become known as the Nanjing Massacre.

Officials in Taiwan say that the Communist forces had a minor role in fighting the Japanese alongside the Republic of China troops, and that during China's eight-year resistance against Japan they were mainly building up their own ranks and fighting a civil war they would eventually win.

"The war of resistance was led by the Republic of China and Chairman Chiang Kai-shek was the force behind it," Taiwan President Ma Ying-jeou said in a speech after the parade, referring to the old Nationalist government's strongman. "No one is allowed to distort that."

After losing the civil war, the Nationalists rebased in Taiwan in the late 1940s, and their constitutional Republic of China government has governed the western Pacific island since then.

China's Communists also claim sovereignty over Taiwan and insist that the two sides eventually reunify, though opinion polls on the island show most Taiwanese prefer self-rule.

Taiwan's effort to cast the war in its favor comes as it seeks to avoid being eclipsed internationally by China, which has eight times more diplomatic allies.

"It's because the rest of the world is ignoring the Republic of China, so they want their contribution to be well recognized," said Kweibo Huang, associate professor of diplomacy at National Chengchi University in Taipei. "At least there's a domestic outcome, which is that everyone in Taiwan shares awareness as a nation or a sovereign state."

China will offer a three-day public holiday in September to mark the war anniversary, and the official Xinhua news agency says the government will hold its first World War II memorial parade that month.

Beijing had invited Taiwan representatives, but the island government said in April that officials would be banned by law and that any private citizens should attend with caution.