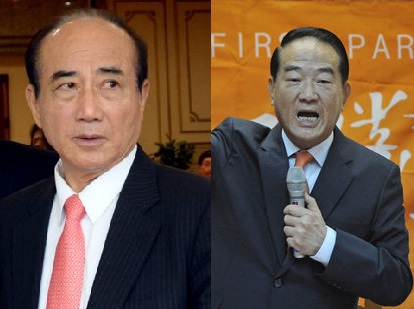 Liberty Times: Wang likely to team up with Soong

As Kuomintang’s (KMT) national congress is drawing near, the issue of presidential nomination has been hotly discussed and Hung’s candidacy becomes a shaky one. A source familiar with the matter told a Liberty Times reporter that a new alliance between Legislative Speaker Wang Jin-pyng and People First Party (PFP) Chairman James Soong is likely to emerge to meet the expectation of pan-blue voters to counter the force led by KMT’s Deputy Legislative Speaker Hung Hsiu-chu.

The rumor came after Soong disclosed Wednesday that he would consider running for president if the Democratic Progressive Party (DPP) and the Kuomintang (KMT) veer off course from fundamentals and the well-being of the people.

People familiar with the matter told a reporter that some members of both parties have been working hard to make it happen.

According to a report published Friday by Liberty Times, Hung’s proposal of “one China, same interpretation” displeased many party members, who are worrying that KMT will lean toward unification. According to another reports last week, a committee member even lambasted Hung during KMT’s weekly Central Standing Committee, saying that many KMT legislators have harbored resentment toward her, as her actions and remarks have run counter to the party’s principles and might risk turning the KMT into another New Party — which pushes for unification with China.

The recent flock of departures indicates conflicting voices within the KMT, and there might arise a repetition of the situation following former President Chen Shui-bian’s victory in 2000. As Tsai continues to jostle her “safety playing cards” to win public support, Hung is only jeopardizing her position as presidential candidate with extreme remarks on cross-strait policies.

Despite worries, President Ma Ying-jeou still shows strong support for Hung. In a TV interview on Wednesday, Ma said that Hung will be officially nominated as the KMT presidential nominate in July and he saw no possibility of change. He added that Hung’s proposal is in line with his view on the basis of the 1992 Consensus. Some analysts interpret the move as Ma's counteraction against Wang, and such political calculations would in turn not only reduce KMT's chances of winning but rebuild the scenes of splitting 14 years ago.