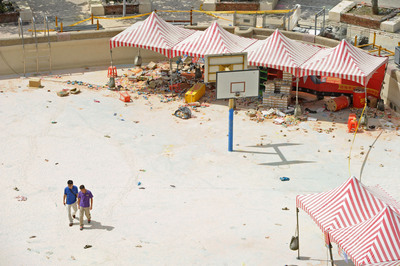 A 20-year-old woman was confirmed dead at 2 p.m. on Monday after 40 hours of intensive care from a harrowing blaze at Formosa Water Park in Bali District, New Taipei City. The woman surnamed Lee was among the 12 sent to Taichung hospitals for care as the medical centers in Taipei were crowded with burn victims injured in the party. Lee was in critical condition with 2nd degree burns covering 90 percent of her body.

498 people were injured after flammable colored powder apparently exploded in midair at a recreational water park around 8:30 p.m. Saturday at the park, firefighters said. Among the patients, 79 have minor injuries, 157 moderate, and 202 critically injured. The status of other remaining patients has yet to be determined, authorities said.

Lee, aged 20 and a senior high school graduate living in Taichung, went to the party with her 12-year-old younger brother, who received severe burns to 90 percent of his body and was admitted to intensive care unit in Cathay General Hospital in Taipei City. A breathing tube and life-supports were placed in Lee throughout the care. On Monday morning, the doctors have announced the rescue measures proved ineffectual, waiting Lee’s mom to remove the tube herself. Her mother arrived around 2 p.m. in the afternoon.

The New Taipei City officials from the Department of Social Welfare have already set up posts in hospitals and are distributing consolation money to victims' families, according to reports. Health authorities also confirmed Sunday evening that 13 burn victims are foreign nationals, including those from Malaysia, Singapore, Europe, Japan, China, Hong Kong, and Macau.