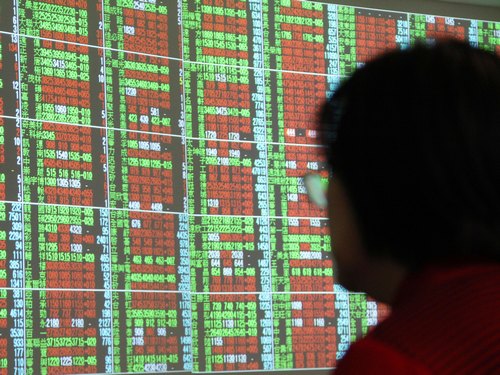 Taipei, June 25 (CNA) Shares in Taiwan closed higher Thursday as large-cap stocks across the board staged a technical rebound, with investors ignoring the losses on Wall Street overnight, dealers said.
Market sentiment improved to some extent after foreign institutional investors raised their long position contracts in the futures market in the previous session, dealers said.
Shares of smartphone camera lens supplier Largan Precision Co. ended at a new high amid optimism toward the company's earnings in the second half of this year, when Apple Inc.'s orders are expected to stream in for production of the next generation iPhone, dealers said.
The weighted index on the Taiwan Stock Exchange ended up 79.03 points, or 0.84 percent, at 9,476.34, after moving between 9,415.78 and 9,500.57. Turnover totaled NT$101.29 billion (US$3.28 billion) during the session.
The market opened up 0.20 percent, with investors ignoring a 178-point drop on the Dow Jones Industrial Average overnight, and gained momentum on strong gains by market heavyweights in both the high-tech and old economy sectors, dealers said.
But as the index briefly breaching the 9,500 point mark early in the session, some investors rushed to lock in their gains, which capped the upturn for the rest of the session, dealers said.
"The move by foreign institutional investors to raise their long position contracts in the futures market helped restore investors' confidence in the spot market. That's why buying emerged, pushing share prices higher, although the index closed shy of 9,500 points," Taishin Securities Investment Advisory analyst Tony Huang said.
Foreign institutional investors raised their long position contracts in the futures market Wednesday to record a net of more than 800 long position contracts.It was the first time for foreign investors to register a net in long position contracts since early May.
"Following the increase in long position contracts held by foreign investors in the futures market, foreign institutional investors stood on the buy side in the spot market today, picking up large-cap stocks throughout the session," Huang said.
Foreign institutional investors bought a net NT$10.37 billion worth of shares on the local main board Thursday, according to the TWSE.
Among the gaining large caps, Taiwan Semiconductor Manufacturing Co., the most heavily weighted stock on the local market, rose 1.03 percent to close at NT$146.50, while Hon Hai Precision Industry Co. gained 1.43 percent to end at NT$99.00 after its chairman Terry Guo forecast a 10 percent annual growth in the company's sales for 2015.
Largan rose 1.68 percent to end at NT$3,640.00, a new closing high in the stock's history.
"Largan's gains also boosted market sentiment as many investors see the stock as a barometer of the broader market," Huang said.
In the old economy sector, food company Uni-President Enterprises Corp. rose 2.66 percent to end at NT$54.00, and textile manufacturer Far Eastern New Century Corp. gained 1.40 percent to close at NT$32.65.
"I think the market needs some time to digest the pressure ahead of the 9,500-point mark despite today's upturn," Huang said. "Investors should keep a close eye on the debt problems in Greece, which could move the global markets."