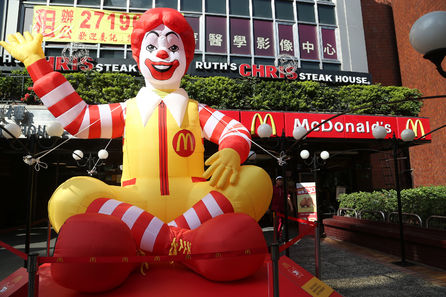 Market & Commodity ■ The Taiwan Stock Exchange (TWSE) main index opened 18.47 points higher to 9,415.78 Thursday, with turnover reaching NT$1.43 billion. (Taiwan News) World News ■ Greece's leader is trying to bridge differences with creditors on a plan to make more reforms in Greece in exchange for bailout loans the country needs to avoid a potentially disastrous default next week. (AP) ■ Climate change has been making the poor in the Asia-Pacific region even poorer and is setting back efforts to haul them out of poverty, the Asian Development Bank says. (AP) ■ Wind from the sea and pre-monsoon rains cool southern Pakistan, likely ending a scorching heat wave that killed at least 749 people. (AP) ■ Fishermen from the Philippines filed complaints with the United Nations against China Wednesday over what they described as "massive and open invasion of human rights by China's law enforcement authorities" in the disputed South China Sea. (CNA) ■ From top-level decisions like how NATO orders its troops into action to the very granular, like repainting an airfield near the Baltic Sea coast, the U.S.-led alliance is retooling for what it fears could be years of confrontation with a resurgent and unpredictable Russia. (AP) Local News ■ Taipei City Mayor Ko Wen-je pointed out Wednesday during a media reception that taking on Farglory’s Taipei Dome challenge is nothing but a “stress test.” The gathering saw the participation of Taipei Deputy Mayors Teng Chia-chi, Charles Lin and Chou Li-Fang, Taipei Secretary-General Su Li-chiung, Department of Information and Tourism Director Chien Yu-yen, and among several others. (Taiwan News) ■ The Ministry of Justice on Wednesday threw the Taipei Dome case against the Farglory Group and the MeHAS City case against Radium Life Tech Co. back in the Taipei City Government’s court. (Taiwan News) ■ Accompanied by consumer protection officers, health authorities in Taipei confirmed Wednesday that a number of food items stocked by wedding banquet halls were found to have long passed their shelf life. (Taiwan News) ■ People First Party Chairman James Soong said Wednesday he might not wait until August to decide whether he would join the presidential race or not, though he would not announce a bid until after the July 19 Kuomintang congress. (Taiwan News) ■ The different caucuses at the Legislative Yuan agreed not to hold a special summer session this year despite the failure of proposals for constitutional amendments to pass, Legislative Speaker Wang Jin-pyng announced Wednesday. (Taiwan News) ■ Jack Yu, spokesperson for Kuomintang presidential hopeful Hung Hsiu-chu, said Wednesday during a press conference at the KMT headquarters that she is suing TV personality and Next Magazine’s publisher, editor-in-chief, and three other respective reporters for defamation. (Taiwan News) ■ The High Court of Justiciary in Scotland decided Wednesday to examine conditions at Taiwan's prisons before issuing its ruling on the extradition a British citizen, who was given a prison sentence in Taiwan. (CNA) ■ Wages in Taiwan's private sector rose in 2014 by an annual 3.82 percent to NT$584,583 (US$18,879) per year on average, according to a 'big data' analysis commissioned by the Executive Yuan and released Wednesday. The study analyzed 4.84 million samples of wage data supplied by Taiwan's labor and finance ministries for a three-year period beginning in 2011. (CNA)