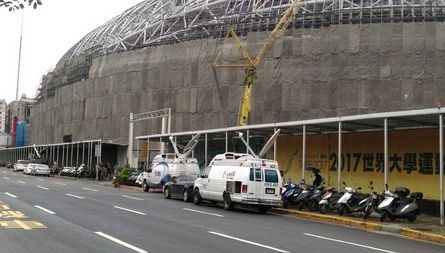 Ko: Taipei Dome proven to be a “stress test”

Taipei City Mayor Ko Wen-je pointed out Wednesday during a media reception that taking on Farglory’s Taipei Dome challenge is nothing but a “stress test.”

When asked about his impression on the poll, Ko said 60 to 65 percent are about normal figures, implying that if it were at 80 percent, it would mean he was still in the honeymoon phase.

“They reflect the city’s high sets of standards and sophistication,” he explained, adding that the real gameplay is only about to begin, putting his stress level to the test.

Claimed by Farglory as Ko’s nitpicking, the mayor responded that even though the dome’s controversy might affect his public opinion, he will nevertheless work to bring shoddy build-on-transfer (BOT) projects out in the open, such as unreasonable contract terms that simply benefitted businesses.

The mayor described metaphorically that handling the Taipei Dome controversy is “like treating a swollen pus,” in a sense that although you can cover it up with bandages and treat it with antibiotics, the scar will always remain. The faster solution would be to cut open the wound, treat it internally, and then seal the wound in one fell swoop.