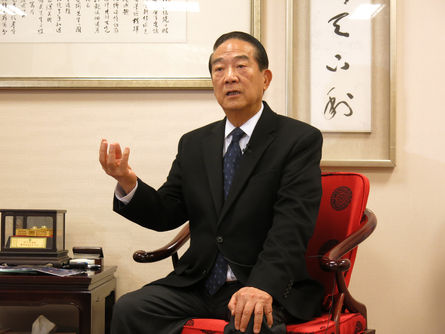 Soong to decide on presidential bid after KMT congress

TAIPEI (Taiwan News) – People First Party Chairman James Soong said Wednesday he might not wait until August to decide whether he would join the presidential race or not, though he would not announce a bid until after the July 19 Kuomintang congress.
The Democratic Progressive Party has nominated its chairwoman, Tsai Ing-wen, to run in the January 16 election, while the KMT now stands behind Legislative Vice Speaker Hung Hsiu-chu, though her nomination will not become official until it is confirmed at the congress.
A recent opinion poll put Soong in third place at 15 percent behind Tsai and Hung, with the PFP leader most likely to draw disaffected KMT voters.
In a radio interview Wednesday, Soong went against earlier predictions that he would wait until August before announcing his decision whether or not to join the presidential race. He said he was likely to do so sooner, but not before the KMT congress.
Soong told the interview he was closely watching what kind of basic policies Tsai and Hung would advocate. He was highly interested to look at those policies, but he was not nervous, he said.
Tsai’s recent visit to the United States was rather successful and showed some changes in her attitude, Soong said, adding he still wanted to see whether those changes would not be turned back by pressure from more radical Taiwan Independence supporters.
Regardless of his presidential ambitions, Soong said he was not interested in running for a legislative seat or eventually for the function of legislative speaker.
He advised Hung that she should accord more importance to visiting Central and South Taiwan and to talking to grassroots voters than to traveling to the United States or to meeting with him.