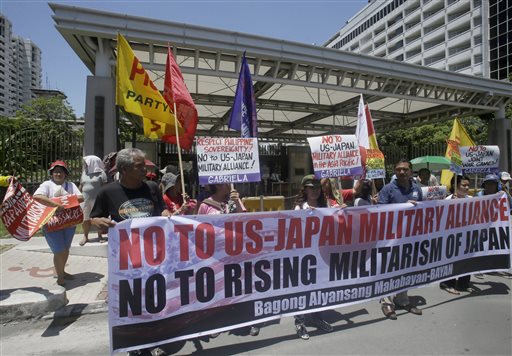 PUERTO PRINCESA, Philippines (AP) — The Philippines launched separate naval exercises with the United States and Japan on Monday on an island province facing the disputed South China Sea, displaying its security alliances amid an increasingly tense territorial rift with Beijing.

Philippine military officials, however, stressed that the weeklong exercises were aimed at enhancing disaster-response readiness and were not directed at any country or linked to the dispute.

Still, China's state-run Xinhua News Agency immediately bristled at Japan's rare involvement in a military exercise with Philippine forces near the disputed region. It said Tokyo was meddling in the conflict to try to divert Beijing's resources from the East China Sea, where the two nations have been locked in a dispute over a chain of islands.

"This seemingly clever maneuver is only short-sighted, for Beijing will probably not be convinced next time when Tokyo says it sincerely wants to improve bilateral ties," Xinhua said in a commentary.

Filipino sailors will hold a search and rescue drill on Wednesday with Japan's Maritime Self Defense Force, which deployed a P-3 Orion surveillance plane to the western Philippine province of Palawan over the weekend.

The Philippine military holds larger military exercises each year with the U.S., a treaty ally. U.S. military officials stressed that the naval maneuvers with Filipino forces this week, which have been held each year since 1995, would be staged in Palawan and eastward over the Sulu Sea and not in the South China Sea to the west of the island province.

U.S. Navy Rear Adm. William Merz, nevertheless, said at the opening of the U.S.-Philippine exercises in Palawan that Washington's alliances with countries like the Philippines allow American forces to operate "where it matters, when it matters."

He noted that U.S. and Filipino forces jointly responded in the aftermath of Typhoon Haiyan's devastation in the central Philippines.

The drills will also "ensure that our alliance with the Philippines remains strong, vibrant, and ready to contribute to the greater stability and peace of the region," Merz said.

Territorial disputes involving China, the Philippines, Vietnam, Malaysia, Taiwan and Brunei have flared in recent years. Last year, tensions rose further when China began constructing artificial islands on previously submerged reefs mostly in the disputed Spratly Islands. Washington asked Beijing to halt the island-building, saying it stokes regional tensions, but China replied that it has a right to undertake the massive construction for civilian and security purposes in what it said is its territory.