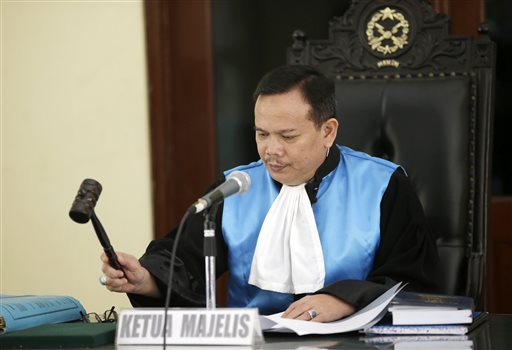 JAKARTA, Indonesia (AP) — An Indonesian court on Monday denied the final appeal of a French national who faces execution for drug offenses.

The administrative court in Jakarta said it could not overturn a presidential rejection of clemency for Serge Atlaoui, citing a lack of judicial authority.

His case has drawn national attention in France, which vigorously opposes the death penalty. Muslim majority Indonesia takes a hardline stance against drug crimes and resumed executions in 2013. So far this year it has executed 14 people convicted in drug cases. Officials justify the death penalty by pointing to the estimated 18,000 young Indonesians who die each year from drug use.

Presiding judge Ujang Abdullah said the court has no capacity to rule on the case since granting clemency is the prerogative right of the president.

"The President's right to grant clemency is granted by the constitution while the authority of the Administrative Court is just to judge on decrees issued by administrative officials," Abdullah said.

Lawyers for Atlaoui made the last-ditch appeal which had little chance of success after President Joko "Jokowi" Widodo denied clemency in December. Prosecutors dismissed the legal maneuvering as only an effort to buy time but did not try to block the appeal. Officials have been at pains to show Atlaoui was not denied any of his rights under Indonesian law.

The Frenchman was arrested in 2005 for involvement in an ecstasy factory on the outskirts of Jakarta. His lawyers say he was employed as a welder at the factory and did not understand what the chemicals on the premises were used for.

"From the beginning of this case, we know and believe that our client is innocent," said lawyer Nancy Yuliana.

She said the legal fight will continue even though the court said all legal options are exhausted. "But I can't say what we would do next. We will discuss it with our client, his family and the French embassy."

Attorney General's office spokesman Tony Spontana said the execution would happen after the holy fasting month of Ramadan, which ends July 17 in Indonesia.

"We welcome the Jakarta Administrative Court's decision rejecting Atlaoui's last appeal," Spontana said. "This is good news for us, but we will not do anything related with his case during Ramadan."

In April, Indonesia executed eight people convicted of drug trafficking, straining relations with Australia and Brazil, whose citizens were among those shot by a firing squad.