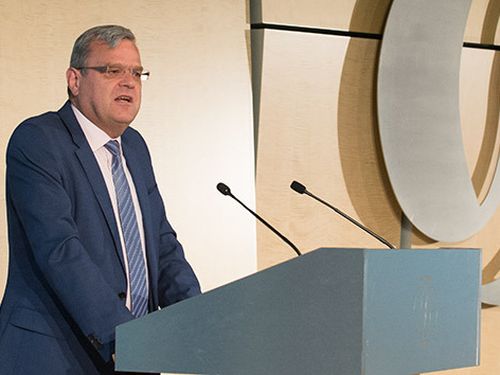 Taipei, June 18 (CNA) The European Bank for Reconstruction and Development (EBRD) is scheduled to hold an event in Taipei in September to introduce business opportunities with the bank in emerging markets to Taiwanese business representatives.
Thomas Maier, managing director for Infrastructure at EBRD, is set to attend the briefing Sept. 8, said Michael Hsu (???), director-general of the Department of International Organizations under the Ministry of Foreign Affairs, at a news conference.
Unlike the EBRD's business briefings of previous years, which have focused on single specific industries, Hsu said, this year's event will be expanded to cover business opportunities in several sectors, including infrastructure, green energy, information and communications technology and agriculture.
"This will be the first time the EBRD has held a large-scale business opportunity briefing in Taipei," he said, adding that the ministry and the Taiwan External Trade Development Council (TAITRA), the country's main trade promotion body, are discussing with the EBRD the details of the event.
The goals of the EBRD, which is headquartered in London, are to promote economic development, market-oriented economies, multi-party democracy and private entrepreneurial ventures.
Taiwan has been cooperating with the EBRD since the bank was established in 1991 to assist countries in Central and Eastern Europe transform into market economies.
As of December 2014, the technical cooperation fund between Taiwan and the EBRD has sponsored a total of 271 projects, which has helped Taiwanese businesses to take part in development projects in countries that need further development, he said. From 2012-2014, Taiwan's cooperation with the EBRD have generated about US$530 million for Taiwanese companies, he added.