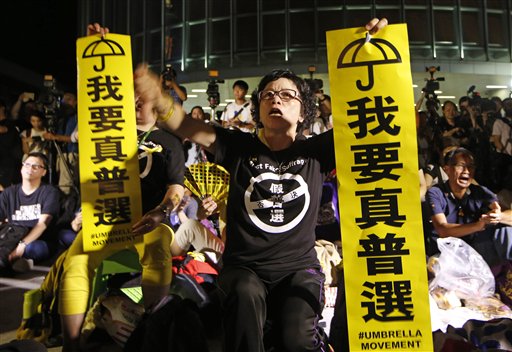 HONG KONG (AP) — A debate by Hong Kong lawmakers over Beijing-backed election reforms extended into a second day Thursday, as the southern Chinese city braced for a vote on the controversial proposals that sparked huge street protests last year.

By mid-morning, about half of the 70 lawmakers had their chance to argue for or against the government's plan to change the way the southern Chinese financial hub's top leader is chosen. The proposal faces likely defeat from the legislature's pro-democracy contingent, which has enough seats to veto it in a vote expected by the end of the week.

The government is offering direct elections for the first time starting in 2017 but wants all candidates to be screened by a 1,200-member panel of Beijing-friendly elites like the one that currently handpicks the leader.

Pro-democracy leaders say that means Beijing is breaking its promise to eventually grant genuine universal suffrage to the city, a special administrative region of China with its own legal and financial system and civil liberties such as freedom of speech not seen on the mainland.

Hong Kong's government needs the support of at least two-thirds of the 70 lawmakers, or 47 people, to win approval. Lawmakers from pro-democracy parties, who hold 27 seats, have vowed to reject it, criticizing it as "fake democracy."

Lawmakers from parties that support Beijing, however, say it is Hong Kong's best chance for democracy while Chief Secretary Carrie Lam, the No. 2 government official, said in opening remarks Wednesday that "having a vote in your hand is better than none."

She said Hong Kong's democratic development faces a "stalemate" if the reform plan is defeated, and the government would be forced to revert to the existing system to choose the next leader.

Under that scenario, increasingly bitter divisions in Hong Kong society that have emerged in the battle over democracy could be harder to resolve.

The battle over democracy has ignited Hong Kong's most tumultuous 12 months since Beijing took control in 1997 after a century and a half of British colonial rule. Tens of thousands of people took to the streets last year to protest the central government's election screening requirement.

For 11 weeks, activists camped out on major thoroughfares in three neighborhoods to demand greater electoral freedom but eventually left the streets after exhaustion set in and Hong Kong's unpopular leader, Leung Chun-ying, refused to offer any concessions.