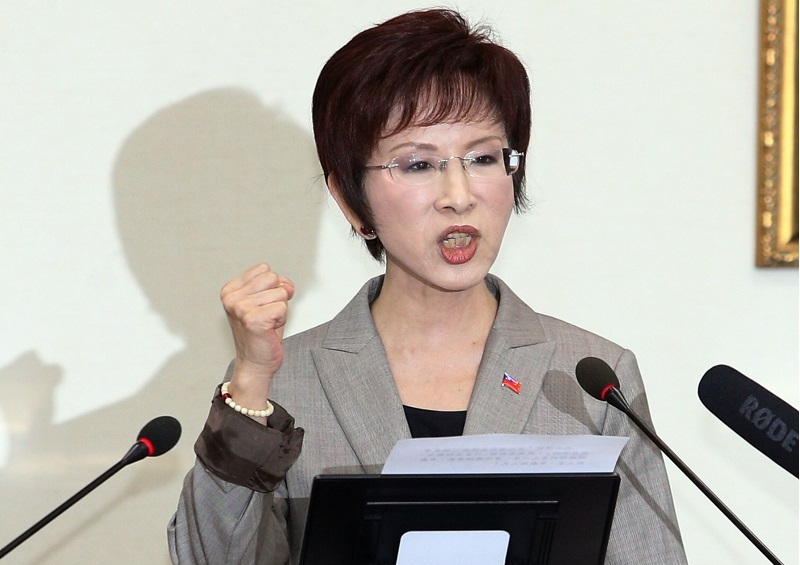 KMT discusses Hung as poll puts her ahead of Tsai

TAIPEI (Taiwan News) – The Kuomintang on Wednesday confirmed the eventual nomination of Legislative Vice Speaker Hung Hsiu-chu as its presidential candidate, while a poll by TVBS cable station put her ahead of Democratic Progressive Party Chairwoman Tsai Ing-wen for the first time.
Hung surprised many by scoring 46.2 percent in opinion surveys commissioned by the KMT last week. Despite being the only candidate officially still in the race, according to the agreed-upon regulations, she needed at least 30 percent to be able to win the nomination.
The KMT held its regular weekly Central Standing Committee meeting Wednesday afternoon, with discussions about Hung’s result and the eventual ratification of her nomination at the top of its agenda. The members only needed one second to applaud and approve the passage of her nomination to the full party congress scheduled for July 19.
In his speech, chairman Eric Liluan Chu reiterated how the party had followed its procedures and emphasized it would do its best to let the public know Hung.
At the same time, cable station TVBS released an opinion poll showing Hung ahead of Tsai for the first time, with 41 percent of respondents intending to vote for Hung if the election were held tomorrow, 38 percent for Tsai and 2 percent for independent Shih Ming-teh.
No other candidates have so far emerged for the January 16 election, though People First Party Chairman James Soong is reportedly mulling a bid.
A similar poll by TVBS two weeks earlier had put Hung at 31 percent and Tsai in the lead at 32 percent. A total of 82 percent of respondents told TVBS they were planning to go and cast their ballot.
The new poll marked a clear distinction in preferences between younger and older voters. Tsai led Hung by more than 20 percent in the age group between 20 and 39, while the KMT hopeful scored better among voters older than 40. Her best performance was the 54 percent she received from voters between 50 and 59, as opposed to 41 percent for Tsai.
Split up by region, the DPP leader’s best result was in Yunlin, Chiayi and Tainan, where she received 44 percent compared to Hung’s 32 percent.
TVBS also looked into what could happen if the KMT failed to nominate Hung and instead chose one of the more senior party members widely seen as potential contenders.
In this event, Legislative Speaker Wang Jin-pyng would put in the best performance, with 35 percent against 36 percent for Tsai. Chu, who has often been pictured as the KMT’s most popular politician, would lose to Tsai by 35 percent to 42 percent. Vice President Wu Den-yih would only receive 21 percent to 50 percent for Tsai, confirming trends shown in other opinion surveys.
TVBS said its poll was based on successful responses from 1,051 adults on June 15 and 16, with a margin of error of 3 percent.