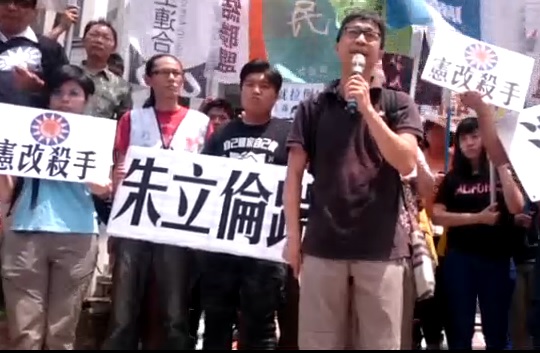 TAIPEI (Taiwan News) – Protesters threw eggs at the headquarters of the Kuomintang Wednesday, blaming the ruling party for the failure of the Legislative Yuan to pass proposals for constitutional reform including the lowering of the minimum voting age to 18.
The Legislature ended its latest session Tuesday evening without any agreement between the KMT and the opposition Democratic Progressive Party on a batch of amendments which would have had to be voted on by the public on January 16, the same day as the presidential and legislative elections.
The KMT linked the change in the voting age from 20 to 18 to the introduction of absentee voting, which the DPP opposed because it considers it as favoring Taiwanese business people working in China, who might be more sympathetic to the KMT or be open to pressure from the Chinese authorities.
Students and social activists gathered outside the KMT headquarters in Taipei Wednesday afternoon to express their displeasure with the ruling party’s alleged stalling of the reforms. They mostly blame KMT Chairman Eric Liluan Chu and the party’s top lawmaker, Lai Shyh-bao.
The protesters also demand that the next president-elect call a national constitutional reform conference before her inauguration on May 20, 2016.
As police prevented them from approaching the KMT building, some of the protesters threw eggs at the headquarters amid scuffling.
Inside, Chu chaired the regular weekly meeting of the party’s Central Standing Committee, which this Wednesday discussed the nomination of Legislative Vice Speaker Hung Hsiu-chu as the KMT’s presidential candidate.
Other constitutional amendments which failed to move forward at the end of the legislative session Tuesday were the need for the appointment of a new premier to be confirmed by the Legislative Yuan and the lowering of the threshold to 3 percent from 5 percent for political parties to be able to win at-large seats at the Legislature.
The next legislative session begins in mid-September.