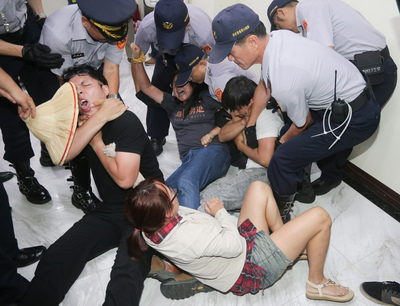 TAIPEI (Taiwan News) – A student activist was arrested after entering the Legislative Yuan Tuesday to protest against its failure to accept constitutional reforms, leading to comparisons with last year’s Sunflower Movement.
Mostly students occupied the Legislature from March 18 to April 10 last year to protest against the ruling Kuomintang’s refusal to accept a thorough review of the controversial trade-in-services pact with China.
Tuesday’s incident followed the failure of negotiations in the morning between the various caucuses to reach any agreement on preparing amendments to the Constitution. The failed talks made it more likely that no changes would be forthcoming, and no vote on them could be held next January 16, the day of the presidential and legislative elections.
Reported members of the group “Taiwan March” entered a legislative building and approached the offices of senior KMT lawmaker Lai Shyh-bao, reports said. They were protesting against what they called the ruling party’s blockage of the constitutional changes, and wanted Lai to come out and face social movements and the public to hear why he should stop prevaricating.
Lai did not appear but police removed the students from the building, reports said. A participant in the Sunflower Movement who ran in last November’s Taipei City Council elections, Wang Yi-kai, was reportedly arrested for attacking the police and preventing them from doing their work, reports said. As he was led away with his hands tied behind his back, another activist, Hung Chung-yen, tried to jump onto a police car, reports said.
The students were especially pushing for the lowering of the voting age to 18 from 20, an amendment proposal which has the reported backing of both the KMT and the opposition Democratic Progressive Party.