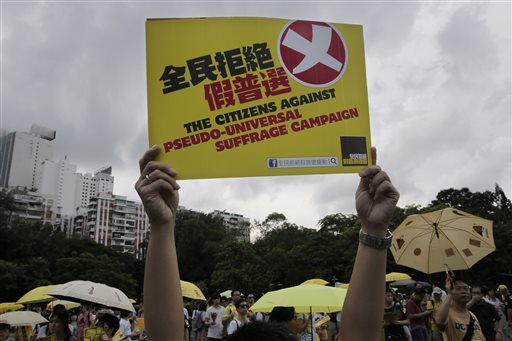 HONG KONG (AP) — Thousands of people, many holding yellow umbrellas, marched in Hong Kong on Sunday to urge lawmakers to vote down Beijing-backed election reforms that sparked huge street protests last year, although the turnout was lower than organizers had expected.

With a crucial vote on the southern Chinese financial hub's political future days away, pro-democracy supporters marched to city government headquarters to rally support for a veto of the government's electoral reform package.

At issue is how Hong Kongers will choose their top leader, who's currently hand-picked by a panel of Beijing-friendly elites. Under the reforms to be put before lawmakers starting Wednesday, the government proposal would allow direct elections for the first time but also require screening of candidates by the panel.

Pro-democracy activists — who caught the world's attention last autumn by occupying parts of the city for 11 weeks to demand greater electoral freedom, turning umbrellas and the color yellow into symbols of their movement — have blasted the proposals as "sham democracy" and called for genuine universal suffrage.

The organizers of the protest, including the Civil Human Rights Front, student groups and pro-democracy political parties, estimated that 3,500 people took part, far less than the 50,000 expected. Police said 3,140 joined.

"I hope that they will bring out another proposal that can be accepted by Hong Kong people," said Louis Cheung, a 54-year-old writer. "It's impossible to have an election without the Hong Kong public's opinion and say Hong Kong has universal suffrage. This is impossible to accept."

Chinese Foreign Ministry spokesman Hong Lei said Friday that the proposal was "in line with Hong Kong's current circumstances, taking into account the interests of and appeals from different social groups and sectors in Hong Kong."

Authorities had been bracing for renewed tensions, fearing that protesters would again try to occupy roads, though organizers have ruled out such action. On Saturday, police removed objects such as bricks and metal bars from protesters' tents outside the government complex.

Last year's student-led protest movement caught the world's attention with its mostly peaceful street demonstrations. Protesters said China was reneging on a promise that the city's top leader would be chosen through "universal suffrage" agreed when Communist leaders negotiated the 1997 handover of Hong Kong from Britain.