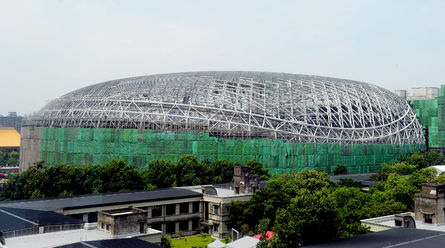 Taipei Mayor Ko Wen-je told reporters Monday during a visit to the Longshan Temple that he has four proposed plans to help resolve Farglory’s Taipei Dome controversy, which he said will be disclosed to the public in two days.

Following Ko’s earlier comment on Saturday during a safety evacuation seminar accusing Farglory as “an enterprise soaked in greed,” the company announced Sunday through the local media that it intends to file a suit against the mayor and his administration for defamation.

After the news broke out, the city government responded Monday that should the developer actually file the suit, it will only show “regret” because it will not help to resolve the problem at hand.

As the dome’s developer had extended its deadline for completion due March 28 this year from the previous date of December 28, the city government already imposed a fine of NT$3 million to Farglory for non-compliance with a request for improvements within three months, a deadline that is due to expire on June 15.

Taipei Deputy Mayor Teng Chia-chi pointed out that there are several options to handling the dome’s aftermath, such as transferring its assets to banks that provided the syndicated loan while continuing with the remainder of its construction, or terminate all or part of Farglory’s contract with the city government.