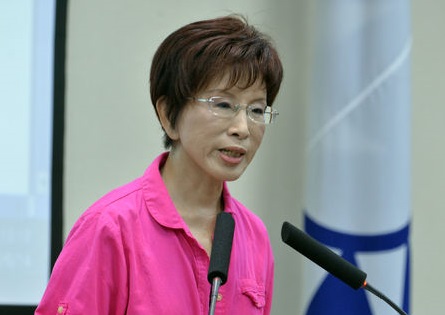 Hung turns down speculation over the Hung-Chu match

Regarding if Deputy Legislative Speaker Hung Hsiu-chu has invited KMT Chairman Eric Chu to be her running mate following Sunday’s qualification in the primary poll threshold, Hung responded to media speculations Monday that the question never crossed her mind, stating the chairman has shown no intention of running for presidency.

Hung successfully passed the 30 percent requirement in the opinion surveys with a support rating of 46.203 percent.

When asked if Chu turned down her offer, the deputy speaker said the topic did come up during their discussion on Sunday but Chu only replied her in a joking manner after she made a comment about not finding a suitable running mate.

“All he said was ‘stop kidding’,” Hung said, adding that it is still too early to be talking about looking for a running mate.

Again questioned whether she will be looking for her electoral partner in southern Taiwan, Hung responded that the possibility is infinite as she finds the right person for the job.

Chu and Hung came into several agreements, including the consolidation of electoral campaigns and electoral offices, which will be fully supported by the central government.