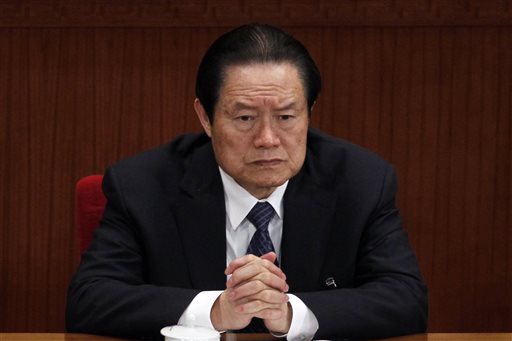 BEIJING (AP) — The former Chinese security czar recently convicted of leaking state secrets did not pass classified documents to a foreign spy or a political rival.

Rather, Zhou Yongkang, a former member of the all-powerful Standing Committee of the ruling Communist Party's Politburo, shared the documents with his qigong master, who claims supernatural abilities, according to a verdict made public last week and which also convicted Zhou of massive corruption.

It's the latest example of a twisted relationship between the leadership of the party, which nominally espouses atheism, and spirituality.

Before Zhou, many senior party cadres and government officials were reported to have sought help and blessings from qigong masters, feng-shui experts, and Buddhist and Taoist monks. Golden Buddha statues are coveted gifts for those in power. Former Chinese President Jiang Zemin is an avid temple-goer.

"The reason is clear — communism is dead," said Willy Lam, an expert on China's elite politics at the Chinese University of Hong Kong. "It's natural for cadres to turn to superstitious beliefs to ward off evil and to help them avoid the pitfalls in the cunning corridors of (politics)."

It's no secret that many Communist leaders believe in Buddhism or Christianity, said Cheng Li, director of the John L. Thornton China Center at Washington-based think tank Brookings Institute.

"They go to temples, and some are closet Christians," Li said. "It's not surprising in a country with a spiritual vacuum."

Qigong, a traditional practice of breathing, gentle body movements and meditation, has legitimate health benefits, Li added. "When you have money and power, what else do you want? Longevity and health. That's human nature," he said.

Superstition also is common among Chinese officials, with examples including hanging a sword to keep disciplinary inspectors away, erecting a basin in front of a government building in hope of amassing wealth, and tearing up a road to ward off bad luck.

"Corruption is only a matter of course when officials abandon Marxism and Leninism for ghosts and spirits," Sima Nan, a political conservative, wrote on his microblog account. "Now the party has distanced itself from atheism for so long as to allow (qigong masters) to have a good life."

Sima has long been trying to expose qigong masters with uncanny abilities as conmen. In another post, he said corrupt officials and the masters have a symbiotic relationship.

"The masters provide psychological massages to corrupt officials, who in turn provide protection for the masters," he wrote.

In the latest revelation, the confidante for Zhou — a once-feared security czar who oversaw China's vast police and security apparatus — has been identified as Cao Yongzheng, a middle-aged man who gained a reputation as a semi-immortal for his supernatural powers in the late 1980s.

Cao even got the endorsement from a reporter at the party-run People's Daily, who wrote that Cao could tell one's past, present and future by merely looking at that person's photo, and that he possessed powers such as the ability to cure infertility.

At the time, China was swept into a national frenzy over qigong, which promised healthier bodies and calmer minds as the country was embarking on the dizzying road of economic reforms that would drastically reshape the lives of hundreds of millions of people.

To win followers, qigong masters boasted uncanny powers such as curing stubborn illnesses without medical treatment, and they soon built large bases of fans who attended massive gatherings, signed up for practice groups, and purchased pamphlets by the masters as they sought answers to life's problems.

The frenzy subsided when Beijing found the fad was sliding into superstitious and cultish cultures, and it came to an end in 1999, when authorities started to crack down on one of the popular qigong schools known as Falun Gong. More than 10,000 of its practitioners showed up in front of the central government to demand fair treatment, making authorities uneasy about the spiritual group's ability to mobilize the masses.

Yet, the demand for spiritual guidance and psychological counseling has risen in China as more people grappled with rapid and profound social and economic changes. The traditional values have been dismantled by the party's earlier campaigns to eradicate the old world, but the party also had seen its own communist beliefs go bankrupt among the public.

"The Cultural Revolution has rooted out China's traditional value system, and the introduction of Western values was disrupted to some extent in 1989," said Beijing-based independent commentator Shi Shusi, referring to the bloody suppression of the 1989 Tiananmen pro-democracy demonstrations.

"But human souls need to have a home, so the Chinese have found the home for their souls in those qigong masters," Shi said.

State-sanctioned religions such as Christianity and Buddhism also have seen a rapid and strong resurgence, while gurus such as qigong masters and feng shui experts — who specialize in harmonizing elements in one's environment — have built small but lucrative circles of clients among China's richest and most powerful and most influential.

Cao, Zhou's confidante, was highly sought after by officials seeking favors from Cao's powerful friends, according to a 2013 article by the Southern Weekly, which used to be famous for its investigative journalism.

Cao was listed in the court statement as part of a small group of relatives and close friends of Zhou who pocketed 2 billion yuan ($340 million) in illegal income through Zhou's help, and media reports described Cao as one of the richest people in China, with business interests in oil, real estate, film and agriculture.

As Zhou came under investigation in 2013, Cao's office in Beijing was raided by police, and the man himself had fled the country, state media reported. Now, the media have suggested that Cao eventually will be brought to justice now that Zhou has been imprisoned for life over corruption charges following his May 22 trial.

Another qigong master, Wang Lin, who has been recently disgraced as a fraud by state media, once had the trust of a Chinese railways minister and found a fan in Alibaba founder Jack Ma. State media said Wang had lived lavishly.

Wang once gave former Railways Minister Liu Zhijun a rock as a blessing that Liu would always stand solid and never fall. The anecdote now serves as a joke after Liu fell to corruption charges.

Dali Yang, a political scientist at the University of Chicago, said the rich and powerful are turning to divine powers to help, including relationships with qigong masters who not only can provide soothing body massages, but also psychological support to help them avoid trouble.