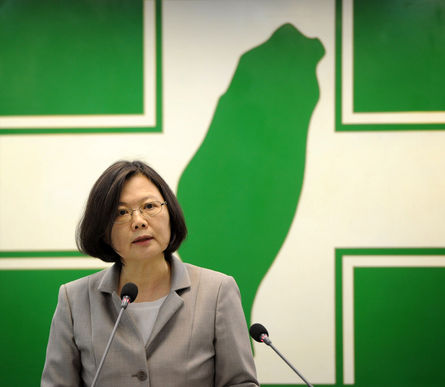 TAIPEI (Taiwan News) – A majority of the public sees Democratic Progressive Party Chairwoman Tsai Ing-wen’s recent visit to the United States as a success which will help her in the race for the presidency, a poll by the Taiwan Brain Trust said Friday.
During her 12-day tour, Tsai met with senior Obama Administration officials, top members of Congress and Asia experts, while she became the first-ever Taiwanese presidential candidate to enter the White House and the State Department.
A total of 64.4 percent of respondents expressed satisfaction with Tsai’s performance in the US, and 71.3 percent said her trip would help her in her effort to win the January 16 presidential election.
Only 16.3 percent of poll participants were dissatisfied with her efforts in the US, while 19.9 percent said her voyage would not really help with her presidential bid.
Her speech at the Center for Strategic and International Studies and her emphasis that she wanted to “maintain the status quo” in Taiwan’s relations with China won support from 71.8 percent of poll respondents and was rejected by 17.8 percent.
The DPP’s return to power would not endanger peaceful and stable cross-straits relations, 49.2 percent of those polled said.
The Taiwan Brain Trust also asked the public about the presidential election, and more particularly about the potential candidates for the ruling Kuomintang. Legislative Vice Speaker Hung Hsiu-chu, the only candidate in the party’s official primary process, was supported by 41.3 percent and rejected by 48.9 percent in the poll.
If not compared to Tsai, the most successful KMT candidate might be Legislative Speaker Wang Jin-pyng, with 41.3 percent, followed by party chairman Eric Liluan Chu with 29.4 percent, Hung with 16.2 percent and Vice President Wu Den-yih with 4.8 percent.
When the Taiwan Brain Trust asked for comparisons between Tsai and the KMT candidates, Wang also came out best, though he still ended up more than 10 percent behind the opposition leader, with 38.4 percent against Tsai’s 49.1 percent.