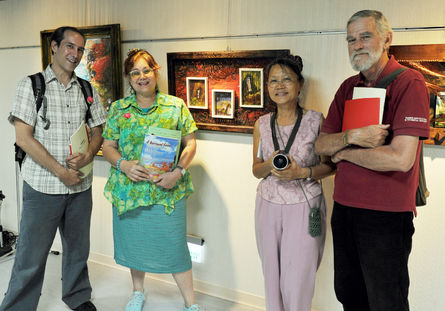 Lynn Miles, a force behind democratization

Lynn Miles, a well-respected human rights and social activist who fought for Taiwan’s democracy, passed away on June 8.

The 72-year-old professor, who taught at Fu Jen Catholic University, is also known by his Chinese name Mei Hsin-yi, had been suffering from mesothelioma, a cancer linked to asbestos that attacks the membrane lining of the lungs and abdomen, for several months, and spent the past few weeks at the Tzu Chi General Hospital in Xindian District.

Miles first came to Taiwan to study Mandarin in 1962. He befriended National Taiwan University professor Peng Ming-min and writer Li Ao, from whom he learnt about the government’s oppression towards social and political activists. In 1967, Miles and his German friend, Klaus-Peter Metzke, opened The Babarian café in Ximending and welcomed people to meet and exchange ideas.

Among the political prisoners, Miles helped Peng who was convicted for publishing a manifesto calling for the overthrow of the Chiang Kai-shek regime to flee the nation for exile in Sweden in 1970. In the following year, he was deported by the Chiang government. He could not return to Taiwan until the government’s blacklist ended in 1996.

While Miles lived in Osaka, Japan, he continued to support Taiwan’s democracy through establishing the International Committee for the Defense of Human Rights in Taiwan. The committee smuggled information on political prisoners out of Taiwan. Miles wrote reports on the political situation and the prisoners, then provided them to Amnesty International and other human rights groups and journalists.

Sunflower movement, the manifestation against the government’s behavior towards a cross-strait service trade agreement in 2014 springtime, was the last social movement which Miles participated.

“ I have only a few words for the Taiwanese. Be proud of your identity as a Taiwanese. Be proud of your history. Taiwan evolved quickly from an authoritarian country to a democracy country. Respect the new immigrants from Southeast Asian countries. Get to know their cultures and befriend them. The majority of Taiwanese still hold prejudice towards the Southeast Asians. I respect and love Taiwan, it’s a beautiful island. However, many Taiwanese do not respect their island’s nature. They need to be more aware of their environment. Taiwan deserves to be cleaner. Finally, I hope more resources are put into education, nurturing the new generation the ability to understand the past and look beyond the future,” said Miles during his final interview with PTS News Network.