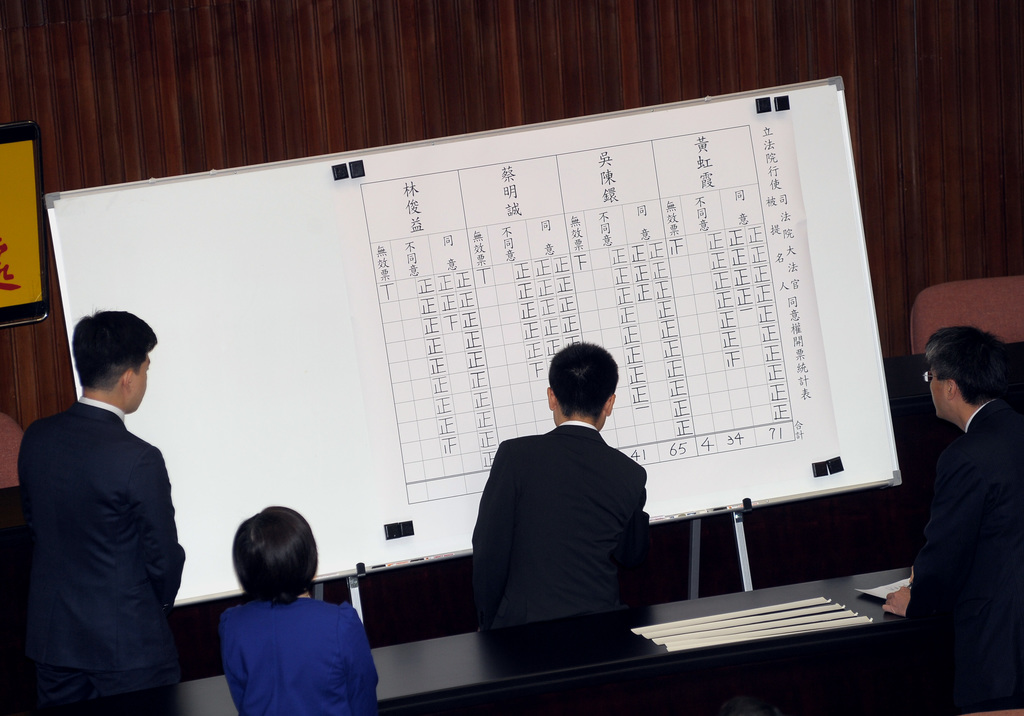 TAIPEI (Taiwan News) – The Kuomintang-dominated Legislative Yuan on Friday confirmed the four candidates for the Council of Grand Justices nominated by President Ma Ying-jeou.
The completion of the procedure followed one day of questioning by lawmakers from ruling and opposition camps after one day with a public hearing.
Each of the nominees received the necessary minimum of 57 votes at the 112-seat Legislative Yuan, though the vote largely reflected divisions between KMT and opposition.
The best known of the four nominees was Deputy Justice Minister Wu Chen-huan, 60, who was approved with 65 against 41 votes.
The most successful candidate was National Taiwan University law professor Tsai Ming-cheng, 59, who received 79 votes in his favor – far more than the KMT total of 64 – and only 28 votes against.
Lawyer Huang Horng-shya, 60, saw 71 lawmakers support her and 34 oppose her. Her career included work on the review of the case of Chiang Kuo-ching, the officer who was wrongly executed for the murder of a little girl.
Shihlin District Court chief Lin Jyun-yi, 57, finished with the lowest score, 63 votes in favor and 44 against.
The KMT had decided to support the president’s nominees, while the DPP allowed its members the freedom to choose. Wu and Lin faced doubts from opposition ranks because of their past behavior in certain controversial legal cases, reports said.
The questioning of the four nominees Thursday included current topics such as the likely abolition of capital punishment, the conflict between Tainan City Mayor William Lai and the Tainan City Council over the corruption investigation against its speaker, gay marriage and the decriminalization of adultery, reports said.