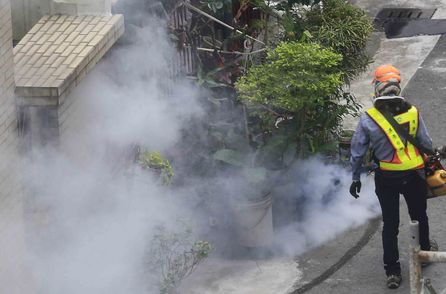 Kaohsiung, June 11 (CNA) A dengue fever cluster was reported in Kaohsiung Thursday after three cases of the disease at the same locality were confirmed by local health authorities.
The three cases were found at the Nanzih Veterans Home where one 84-year-old resident, and two staff members, one of whom was living in the home, the other living in Gushan District of Kaohsiung, were diagnosed with the disease. All three cases are considered indigenous, said health officials.
The three victims developed symptoms of the disease between May 27 and June 5.
Since all of them are either working or living at the veterans home, health officials conducted a hygiene check of the home June 4-6, and found nearly 100 adult mosquitoes were carriers of the dengue virus, said the Kaohsiung City Government Department of Health.
Health officials sprayed insecticide at the home June 6 to eliminate mosquitoes, and were set to spray a second time Friday.
The officials also found a nearby community managed by the Veterans Affairs Commission has 10 dilapidated and empty houses, which are so filthy that they have become an ideal breeding ground for mosquitoes. The Department of Health asked the Veterans Affairs Commission to clear the community immediately to deny mosquitoes any breeding ground. The three new cases brought the number of indigenous dengue fever cases in Kaohsiung this year to 120, said the department.
Dengue fever is a mosquito-borne tropical disease. Symptoms include fever, headache, muscle and joint pain. In some cases it can develop into life-threatening dengue hemorrhagic fever. (Wang Shwu-fen and Maubo Chang)