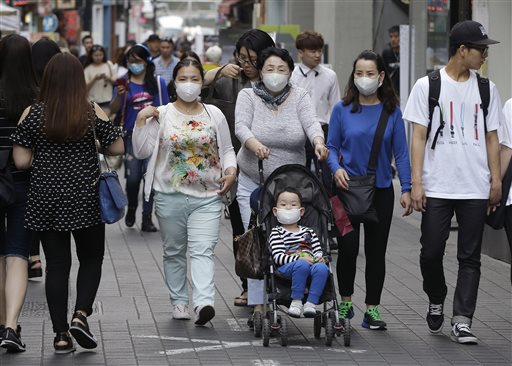 Taiwan expands MERS alert to all of South Korea

TAIPEI (Taiwan News) – A level 2 travel advisory already valid for the Seoul area was expanded to include all of South Korea because of the expanding Middle East Respiratory Syndrome Coronavirus outbreak, the Centers for Disease Control announced Tuesday.
Level 2 is a warning, while level 1 is just a call to pay attention. Until Tuesday evening, most of South Korea was covered by a level 1 travel advisory, with only Seoul and adjacent Gyeonggi Province under a level 2 warning.
Taiwan Taoyuan International Airport also announced that beginning Wednesday, it would concentrate passengers arriving from South Korea and separate them from other arrivals in order to make its monitoring of their health and the prevention of the virus entering Taiwan easier. Each day, 14 flights brought an average 2,000 travelers from South Korea, reports said.
The number of deaths reached at least seven, with more than a hundred cases confirmed and a widening number of people being quarantined. An engineer returning from South Korea was listed as a suspected case at a Hsinchu hospital Tuesday.
The latest move by Taiwan followed the South Korean government’s decision to define the outbreak as “serious,” the highest level of four in its system.
Taiwan’s CDC said it might raise its alert level to its highest form, known as level 3, if a community infection occurred in South Korea.
The MERS-CoV outbreak in the Northeast Asian country has led many Taiwanese to cancel holiday plans for that country, with the CDC and the customs authorities increasing their guard against potential entry of infected persons into Taiwan.