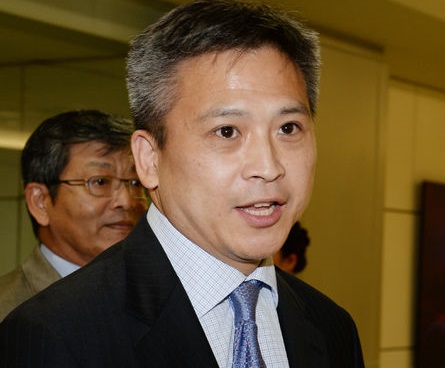 Kin Moy, the new director of the American Institute in Taiwan's (AIT) Taipei Office, arrived in Taipei Monday to assume his post. Upon his arrival, Moy told the press in Chinese that he was happy to take his new job as America's top representative in Taiwan.
He said besides making new friends, he will work to return the favor to the Taiwanese people who have shown him such kind friendship. Before departing for Taipei, he said in Washington on Sunday, "The next few years will be an important time in the history of our friendship," adding that he looks forward to joining the AIT team in strengthening ties.
Moy has been in the U.S. Foreign Service for over 20 years and has extensive experience working in and on the Asia-Pacific region, according to a press release by the AIT, which represents U.S. interests in Taiwan in the absence of diplomatic ties.
He is the first Chinese American to serve as an AIT director, and the second high-ranking American diplomat of Chinese descent to serve in the Taiwan Strait area, following Gary Faye Locke, who was the United States ambassador to China from 2011 until 2014.
The AIT said Moy's most recent diplomatic assignment was at the Department of State in Washington, D.C., where he served as deputy assistant secretary of state in the Bureau of East Asian and Pacific Affairs, with responsibility for China, Mongolia and Taiwan.
Prior to that assignment, Moy served as deputy executive secretary in the Office of Secretary of State Hillary Clinton. He also served as director of the executive secretariat staff in the office of former Secretary of State Condoleezza Rice, deputy director of the Office of Maritime Southeast Asia, desk officer in the Office of Chinese and Mongolian Affairs, and special assistant in the Executive Secretariat in the office of former Secretary of State Madeleine Albright.
In addition to his Washington assignments, Moy has served in the U.S. Embassy in Beijing, the U.S. Embassy in Seoul, and the U.S. Consulate in Busan, South Korea, the AIT said.
Moy, who is a career member of the Senior Foreign Service and holds the rank of minister counselor, will stay in Taipei during his tenure, along with his wife and their four children. (By Bien Chin-feng, Elizabeth Hsu and S.C. Chang)