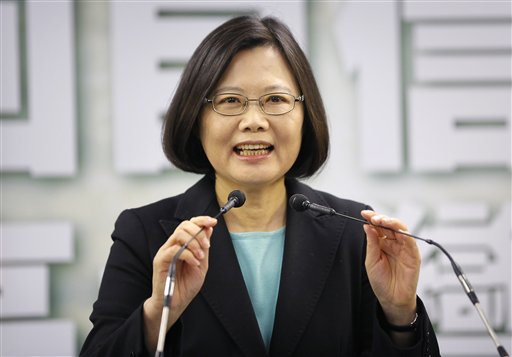 Marie Harf, a senior advisor for strategic communications at the U.S. State Department, said on June 5 that Washington's guideline for interactions with Taiwan has not changed despite Tsai’s “successful” trip.

Harf said the U.S. appreciates Tsai Ying-wen’s visit and they have many constructive exchanges with her on a wide range of issues.

It was learnt that Tsai met with several U.S. officials, including Deputy U.S. Secretary of State Antony Blinken; Daniel Russel, assistant secretary of state for East Asian and Pacific Affairs; and Evan Medeiros, the senior director for Asian Affairs at the NSC who stepped down from his position on June 4.

Tsai is the first presidential candidate of Taiwan who stepped into the United States Department of State despite Taiwan’s diplomatic isolation.

"From time to time, we do meet with Taiwanese officials; certainly the Secretary has, and others have as well," she said. However, Harf did not confirm whether Tsai met with Blinken, the State Department's number two official, second only to Secretary of State John Kerry.

Harf stressed that Taiwan and China have developed a strong unofficial relationship with Taiwan which is based on the Three Joint Communiqués, theTaiwan Relations Act, and the U.S.'s one-China policy that have been around for many years. She reiterated that U.S. policy has not changed when inquired about China’s remarks that the meeting at the State Department was sending a wrong signal to Taiwan.