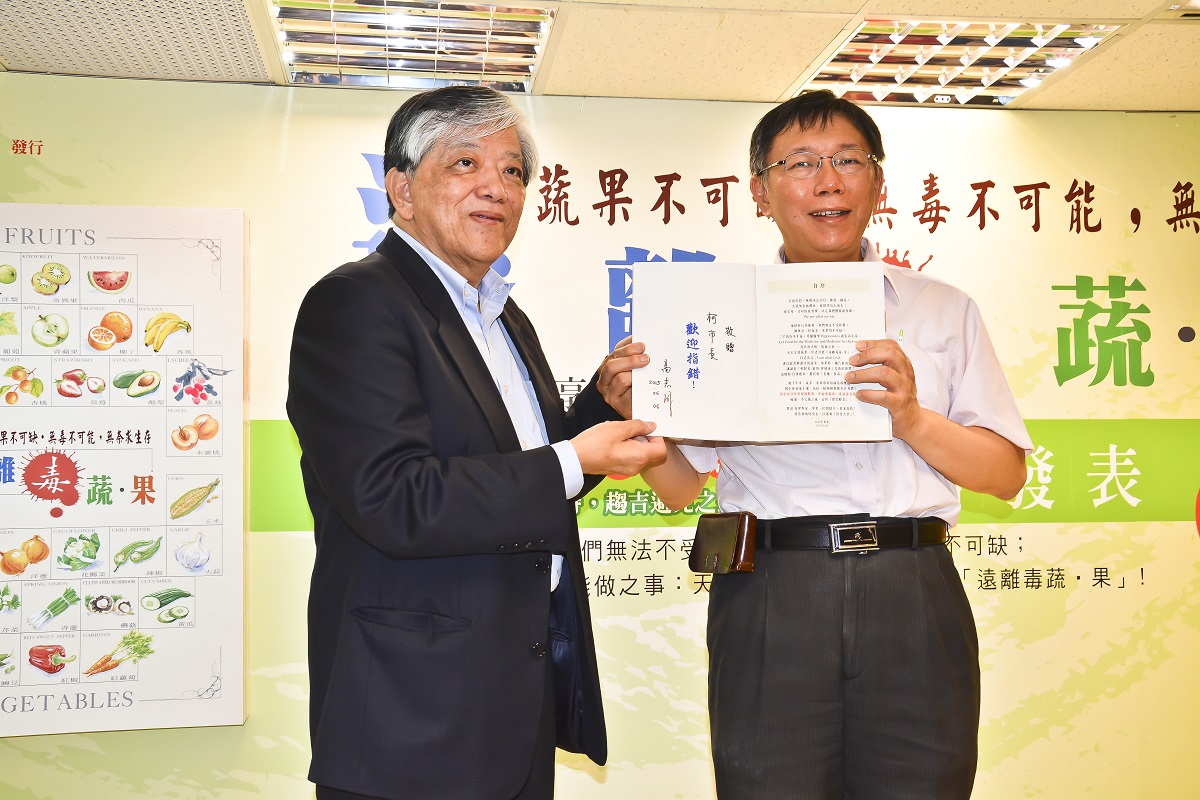 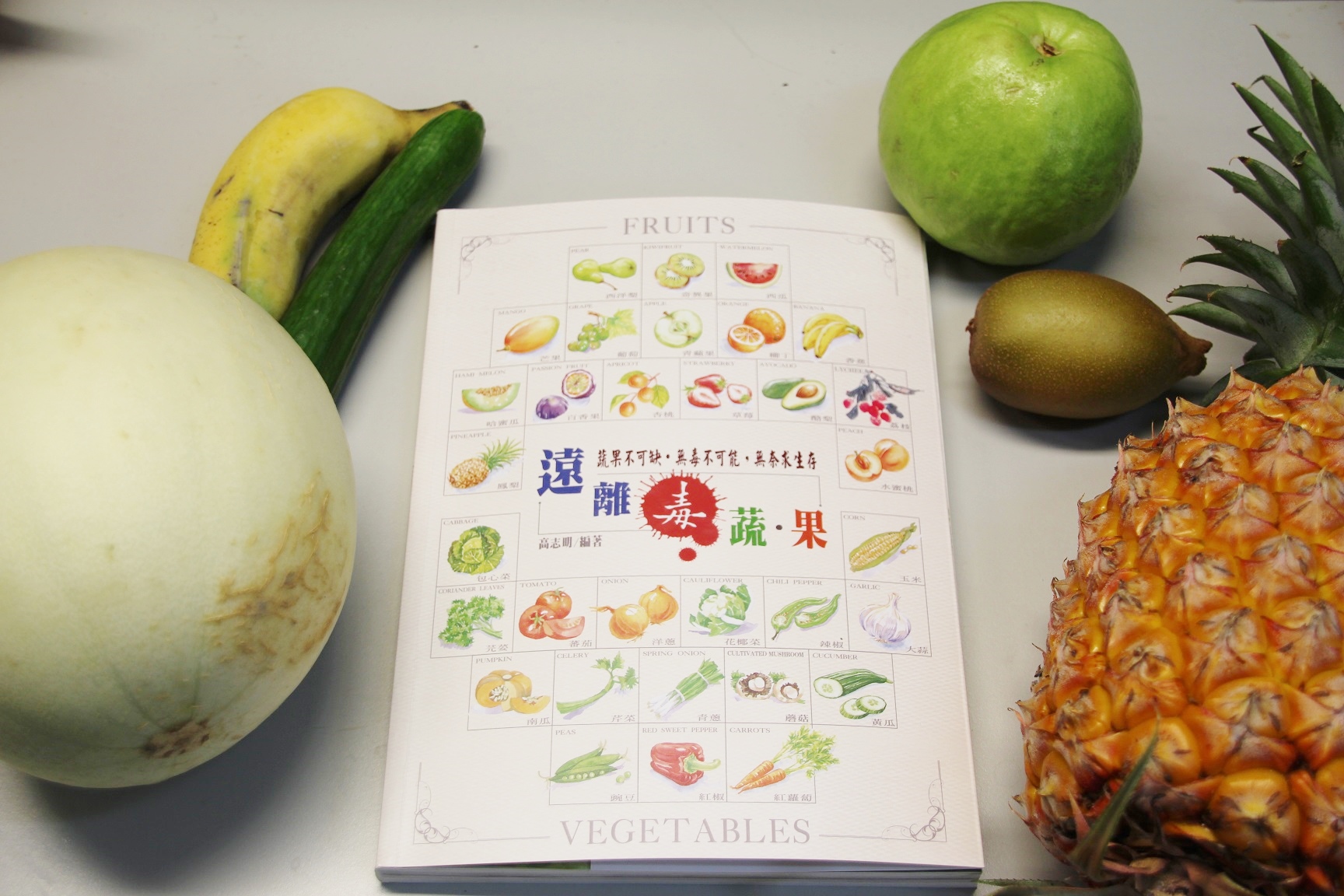 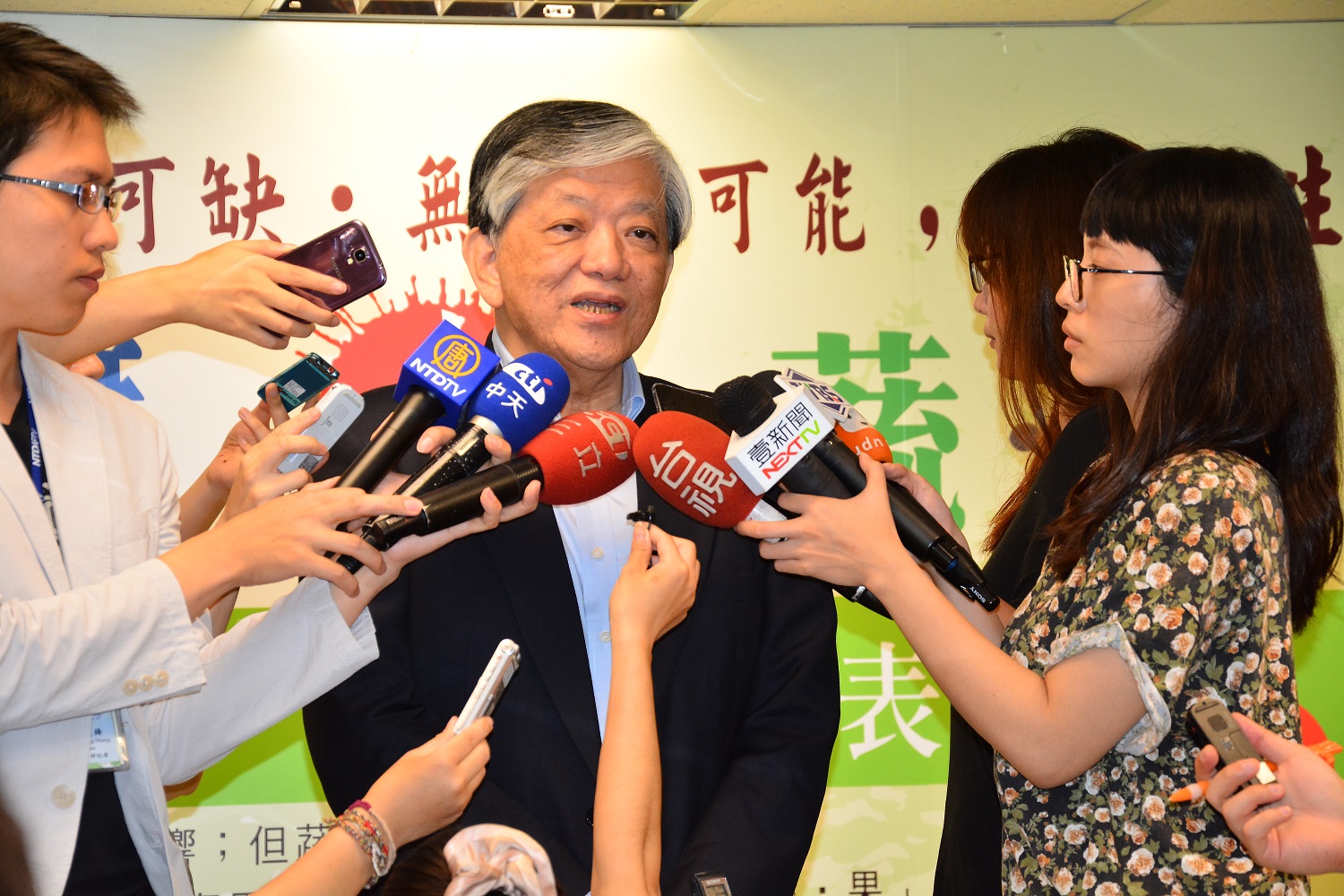 TAIPEI (Taiwan News) – I-Mei Foods Co., Ltd. CEO Luis Ko said at the presentation of his first book Saturday, “Far from Toxic Fruit and Vegetables,” that zero pollution was impossible in today’s world.
Over the past year, Taiwan has been hit by one food safety scandal after the other, from adulterated oil to pesticide residues on tea leaves. Ko emphasized that even though people were striving for food without any toxic substances, zero pollution levels would be impossible to find in today’s polluted world.
During the food safety scandals, the I-Mei CEO grew into a spokesman for improvements in food safety practices and for reliable products.
Saturday’s book presentation was attended by Taipei City Mayor Ko Wen-je, who received a copy of the work, John Tung Foundation food section official Hsu Huei-yu and Chiang Wei-shui Foundation Executive Director Chiang Chao-ken.
The I-Mei chief’s book criticizes the government for on the one hand stipulating that food packaging should bear numerous details about contents and ingredients, but on the other hand failing to use unified definitions for some of those ingredients. At least three different types of beans are labeled in English as “soybean” on products exported from Taiwan, the book says.
The labeling problem in Taiwan is extremely serious, Luis Ko said, with even the Ministry of Education, the Ministry of Health and Welfare and the Ministry of Finance using different names for the same food product. Manufacturers, government officials and academics should come to an agreement about unified terms as soon as possible, he said.
Mayor Ko said that food manufacturers had to bear responsibility for the safety of their products and should not just rely on checks by government health inspectors. He cited I-Mei as an example of a biscuit maker which had an honest and reliable attitude.
The I-Mei CEO said that European and Asian concepts of food safety had similar roots. In Greece 2,400 years ago, Hippocrates said “Let food be thy medicine and medicine be thy food,” while in Asian culture, food and medicine are considered as coming from the same source.
If there is no clean water, no clean air, no unpolluted earth, it was impossible to produce untainted high-quality agricultural products, Ko said. This way, it would be impossible for the next generation to cut down its use of drugs and its visits to hospitals.
He also criticized the fact that many test results were limited as being only applicable to the sample tested, or as not necessarily being legal. It was tragic that one could only eat something if it had been tested, he said.
On the issue of “secondhand pesticides,” I-Mei’s Ko said it was extremely difficult nowadays to produce untainted vegetables and fruit in Taiwan. “If secondhand smoke can be brought under control, why is the same not possible with secondhand pesticides?” he said. Before the government encouraged young people to return to the countryside to work as farmers, legislation should first solve the problem of secondhand pesticides, Ko said. Only then would it be possible for the young people to fulfill their ideals of producing food that was organic or at least had no or little toxic residues, he added.
Ko said he would soon publish a second book about the difficulty of finding clean edible oil. In this work he said he would rely on his experience to mention the problems of government, consumers and producers, in the hope that a solution would be found, otherwise the series of food scandals would never end.
Luis Ko’s “Far from Toxic Fruit and Vegetables,” published with the help of the Taiwan News, is available from I-Mei chain stores and from its online site. The FamilyMart convenience stores will also begin selling it in their I-Mei product sections from June 10.
Ko also donated more than 600 copies of the book to over 300 remote elementary schools in the hope that young pupils in areas where information is scarce can also profit from the latest about food safety.