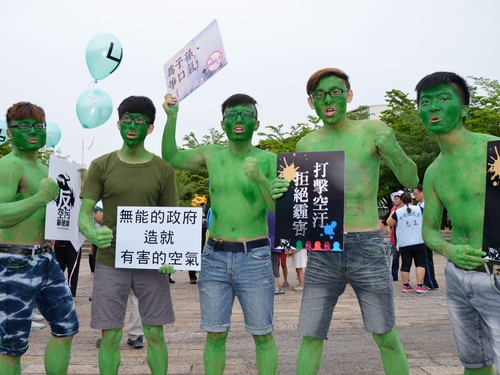 TAIPEI (Taiwan News) – Environmentalists marched against air pollution in nine cities and counties for the first time Saturday to emphasize the gravity of the problem.
In front of the Presidential Office Building in Taipei, participants recruited by the Tree Party performed health exercises. As a symbolic air quality alert was launched, the protesters had to try on oxygen masks, a move which reportedly did not make the numerous children in the crowd happy.
Similar scenes developed in Taichung, Changhua, Nantou, Yunlin, Chiayi, Tainan, Kaohsiung and Pingtung.
The protesters criticized the government for continuing to describe Central and Southern Taiwan as a center for the petrochemical industry, thus totally neglecting the fact that those regions were already heavily affected by air pollution.
The Tree Party called for the introduction of an energy tax, the devotion of 10 percent of building areas to green, the reduction of carbon emissions and the protection of trees.
A representative of a parents association said that about 30 percent of elementary school pupils in the capital suffered from respiratory problems and allergies which doctors were unable to find a clear explanation for. He encouraged the Ministry of Education to design a thorough system to warn schools of rising air pollution, because the problem should not become another threat to campus safety.
The protesters also called attention to the links between air pollution and cancer, with lung cancer residing among the most important causes of death for 33 years.