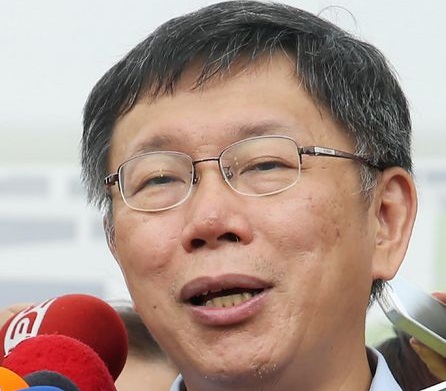 TAIPEI (Taiwan News) – The assets of Taipei City Mayor Ko Wen-je and his wife exceed NT$100 million (US$3.24 million) if you include his home, the Control Yuan announced Friday.
Ko campaigned for mayor last year as a “man of the common people,” in stark contrast to Kuomintang candidate Sean Lien, who belongs to one of Taiwan’s wealthiest political families and lived at one of Taipei’s top luxury mansions until he moved out during the campaign.
The Control Yuan, the nation’s highest watchdog body, requires government officials to register their assets and publishes a list on a regular basis. Friday was the first time that Ko, who was elected last November 29 and took office on December 25, was included in the data.
The assets of Ko and his wife Peggy Chen, who are both surgeons, totaled just over NT$109 million (US$3.5 million). Their real estate include their home near Chiang Kai-shek Memorial Hall, valued at NT$65 million (US$2.1 million), and property in Hsinchu City, reportedly a piece of agricultural land worth an estimated NT$15 million (US$486,000), according to the Control Yuan.
Ko had also listed the NT$10 million (US$324,000) he had loaned from his father in 2011 to help him buy his Taipei home, reports said.
The mayor also owned NT$22 million (US$713,000) in savings and NT$6.68 million (US$216,000) in financial funds, according to the Control Yuan list.
The couple did not report any jewelry, antiques, paintings or other works of art, reports said.
Asked about the assets by reporters, Ko said that the majority of them had been registered under his wife’s name. The piece of land in Hsinchu was an expression of his father’s desire for him to leave Taipei and return to the family’s home town of Hsinchu to work, he said.