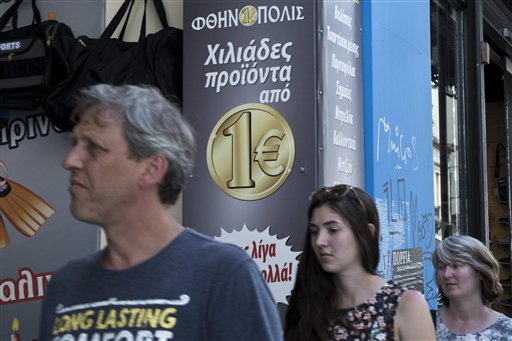 Greece would suffer if it left eurozone.

FRANKFURT, Germany (AP) — Many economists think a Greek departure from the euro currency alliance would be a disaster. For Greece.

But for the rest of Europe? Maybe not.

Greece is struggling to meet deadlines to repay a crushing debt load and avoid a default that could drive it out of the 19-country eurozone. Yet any fear that a Greek exit might ignite a broader financial catastrophe — as the 2008 collapse of U.S. investment bank Lehman Brothers did — is misplaced, some analysts say.

Others worry that letting a country leave the alliance could permanently damage their shared currency.

Greece's new left-wing government is struggling to convince its international creditors that its reform plans are credible. The two sides have been at odds over such issues as pension cuts, tax increases and revenue surpluses required of Greece.

An agreement is needed for Greece to receive the remaining money in its bailout fund — 7.2 billion euros ($8.1 billion). Without it, Greece risks bankruptcy.

The Greek government is resisting the tough conditions attached to more bailout loans. On Thursday, it took the unusual step of asking to bundle the four payments that are due this month to the International Monetary Fund into one payment on June 30.

But the standoff raises the likelihood of an endgame in which Greece runs out of money, restricts the flow of capital and produces a new national currency so it can print money to pay its bills.

Here's what could be at stake outside Greece:

A PERIOD OF TURMOIL

Economist Holger Schmieding at Berenberg Bank in London predicts a period of "disorientation" while investors figure out what the impact will be. The first word of an impending departure would likely roil markets, especially in Europe. Stocks and the euro might fall. And borrowing costs for other eurozone governments with shaky public finances, such as Italy and Portugal, might rise, at least temporarily.

Yet Schmieding foresees no serious long-term damage and dismisses talk of a comparison to Lehman's collapse. The risk for Europe as a whole, he says, "is very, very small — virtually zero."

The key difference between Lehman and Greece centers on the element of surprise, according to Schmieding: Lehman's collapse was unexpected and spread panic across markets as investors wondered which bank would go under next.

There's no surprise surrounding Greece. Everyone knows that the country, which accounts for only around 2 percent of the eurozone economy, has been in trouble since 2009. Lenders have had plenty of time to curtail loans and investments in Greece. So they have little connection to the financial troubles there.

Whether Greece stays or goes, just ending the uncertainty would help, says Schmieding: "The resolution of this, one way or another, would be better than the current stalemate."

So far, markets appear to be with Schmieding. European stocks are off recent highs but haven't suffered a serious drop. And bond investors appear to be signaling their confidence that Europe could withstand a Greek exit without serious damage. Even heavily indebted, slow-growth Italy can still borrow at just 2.1 percent annual interest — down from over 7 percent in 2011.

European markets have been soothed by a 1.1 trillion-euro ($1.2 trillion) bond purchase program from the European Central Bank, which is trying to raise inflation and accelerate the economy.

Could allowing one country to leave the eurozone for the first time destroy confidence in the alliance over the long run? Lenders might begin calculating the risk that another country would leave the alliance and fail to repay its debts. They would, as a result, likely demand higher interest rates to compensate for that risk. That would make it costlier for governments to borrow and erode one of the key achievements of the monetary union.

TOOLS TO USE AGAINST TROUBLE

Optimists point to the eurozone's new tools to defend itself against the sort of crisis it's struggled to manage for the past few years. As a result of the Greek crisis, and the ensuing problems endured by the likes of Ireland and Spain, the eurozone has created a bailout fund that can lend to troubled countries.

The ECB has also offered to buy government bonds of countries that come under pressure if they accept reforms. This helps hold down borrowing rates. And the ECB now oversees big banks. That contrasts with early supervision by national authorities, which were sometimes slow to address problems.

In the end, no one really knows what will happen if Greece exits the euro.

But he said he couldn't rule out an unexpected cross-border spread of market turmoil that raises government borrowing costs. It likely wouldn't rival Lehman. But trouble is possible.

U.S. Treasury Secretary Jacob Lew has warned his European counterparts that the risks are unknown. He's urged Greece and its creditors — the IMF, the ECB and the European Commission — to forge a deal.

"The big question is, what are the indirect effects?" Loynes said. "Will there be a contagion effect to other countries or other markets, to borrowing costs, financing costs across the eurozone as a whole?"

"No one can know the answer, because you can't come to some sort of mathematical conclusion about this."