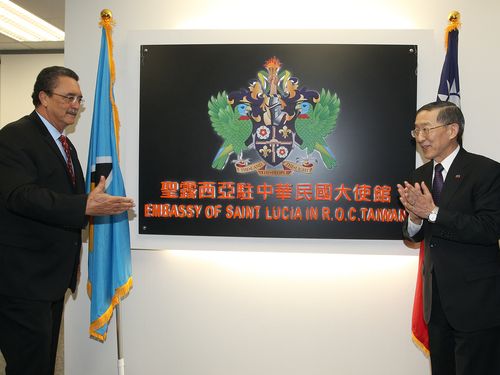 Taipei, June 4 (CNA) St. Lucia opened an embassy in Taiwan Thursday, the Caribbean country's first in Asia, in an effort to strengthen bilateral ties. The inauguration ceremony was presided over by St. Lucia Prime Minister Kenny Anthony, who is on a visit to Taiwan this week.
The ceremony was also attended by St. Lucia's Minister for External Affairs, International Trade and Civil Aviation Alva Baptiste, Permanent Representative of Saint Lucia to the United Nations Menissa Rambally, and other St. Lucian officials. Also present were Taiwan's Foreign Minister David Lin, Taiwan's ambassador to St. Lucia James Chang and other Taiwanese foreign affairs officials.
"We've decided to strengthen our bilateral relations," Baptiste said at a reception marking the opening of the embassy.
This is the first time St. Lucia has established an embassy in Taiwan. The Republic of China and St. Lucia have maintained close cooperation in public health, education, infrastructure and culture since the two countries resumed diplomatic relations in 2007 following a 10-year hiatus.
The two sides first established diplomatic ties in 1984, but St. Lucia switched its recognition to the People's Republic of China in 1997.
Of Taiwan's 22 diplomatic allies, Saint Vincent and the Grenadines is now the only one not to have set up an embassy here.