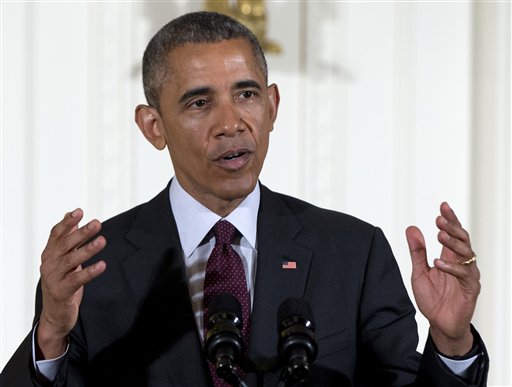 WASHINGTON (AP) — President Barack Obama said China has made inquiries about potentially joining a Trans-Pacific trade agreement in the future, introducing a new variable to an unfolding debate in Congress over granting him the power to negotiate such international deals.

In an interview Wednesday with American Public Media's "Marketplace" radio show, Obama offered assurances that the Trans-Pacific negotiations among the U.S. and 11 other Pacific rim countries would set international trade rules affecting even China, which is not now a party to the talks.

"They've already started putting out feelers about the possibilities of them participating at some point," Obama told "Marketplace" host Kai Ryssdal.

Obama often has promoted the Trans-Pacific deal as a way for the U.S. to gain influence in Asian markets and to keep China "from writing the rules of the road." If China were to join at some point, it would have to agree with the agreement's standards.

Even without China, Obama argued that if other leading economies in the Asia-Pacific region agree to enforceable labor and environmental standards, intellectual property protections and reduced tariffs, "then China is going to have to at least take those international norms into account."

Obama wants negotiating authority that would set rules for future trade deals, with lawmakers retaining the right only to approve or reject the final agreements, but not change them. Republican leaders and a majority of Republican lawmakers support Obama's push. Most House Democrats are stiffening their opposition, contending the deals would be toothless and cost jobs.

The Senate voted for this fast-track authority last month.

By raising the prospect of China's inclusion, Obama is likely to intensify a debate about whether to add restrictions on currency manipulation to legislation, a step the White House opposes. Proponents of punishing countries that keep their currency artificially low to boost exports have used China as an example of the kind of culprit they want to contain.

Democratic Rep. Brad Sherman, who spoke at a rally protesting the fast-track legislation Wednesday, said China could join the pact later and continue to manipulate its currency. "China is the No. 1 beneficiary of this agreement," Sherman said.

Administration officials and trade proponents say it's not clear that China continues that practice. They say multinational trade deals are the wrong venues to address currency issues, and that such a move could lead to trade wars and undermine the ability of the Federal Reserve to carry out monetary policy.

Obama's comments in the "Marketplace" interview came on a day devoted to pushing his trade agenda, which faces an uncertain vote in the House this month. The president also was speaking to television stations in California, Texas and Washington state media markets where Democratic lawmakers have either already committed to supporting him or remain undecided.

Obama conceded in an interview with Seattle's KING television that in an economy the size of the U.S.'s there could be some displacement of jobs, but he said it would be nothing compared to past job losses and argued trade would create higher paying jobs.

"If a company is looking for low wage labor, they've already left, they're not here anymore," he told KVIA, an ABC affiliate in El Paso, Texas.

One of them, Democratic Rep. Cedric Richmond said that he is leaning against the bill, but that Obama lobbied heavily. "He made an aggressive pitch" in their most recent talk, Richmond said, with the president stressing the possible benefits of trade to the New Orleans ports.

But Richmond suggested the White House has failed to mount a coordinated campaign. Richmond said pro-trade business interests in his district "didn't contact me until this week," whereas he has gotten anti-fast-track calls for months.

Richmond said he told Obama that the president's phone call was the first one to ask him to support fast track, and "I think that shocked him."

Democratic opponents, meanwhile, were stepping up their criticism and rebuffing Obama's lobbying efforts.