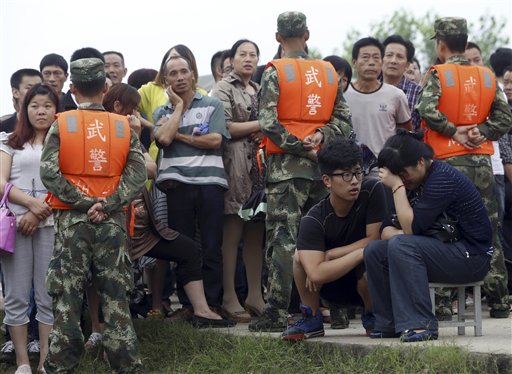 JIANLI, China (AP) — The death toll of a river cruise capsizing in the Yangtze River jumped by 39 fatalities to a total of 65 Thursday morning, the most significant increase since the Eastern Star overturned in a heavy storm with 456 people on board more than two days earlier.

Chinese state broadcaster CCTV said rescuers cut into the ship's overturned hull early Thursday as it jutted out of the grey river water but found only drowned people inside. Rescuers said they planned to cut into at least another part of the hull in hopes of finding survivors.

Chinese authorities deployed scores more divers and a large crane to stabilize the ship. The capsizing of the multi-decked ship Monday night is on track to become the country's deadliest maritime disaster in seven decades. Chinese authorities have launched a high-profile response while tightly controlling media coverage.

Premier Li Keqiang, the country's No. 2 political leader, traveled to the disaster site in the Hubei province county of Jianli where he urged "all-out," 24-7 efforts.

CCTV said 14 people survived, some of them by swimming ashore and three by being pulled out of the ship by rescuers on Tuesday.

But the vast majority of those on board remain missing. Many were elderly tourists taking in the scenic vistas of the Yangtze on a cruise from Nanjing to the southwestern city of Chongqing.

Records from a maritime agency show the capsized ship was cited for safety violations two years ago. Authorities in Nanjing held the ship and five other Yangtze cruise vessels after it found them violating standards during a safety inspection campaign in 2013, according to a report on the city's Maritime Safety website. It didn't specify the Eastern Star's violations.

The shallow-draft boat, which was not designed to withstand as heavy winds as an ocean-going vessel can, overturned in what Chinese weather authorities have called a cyclone with winds up to 80 mph (130 kph).

"The river ships tend to have a lower standard on wind-resistance and wave-resistance than ocean ships," Zhong Shoudao, president of the Chongqing Boat Design Institute, said at a news conference along with weather and Transportation Ministry officials. "Under the special circumstance of cyclone, the pressure on the one side of the boat went beyond the standard it was designed for, resulting in the overturning of the boat.

"The boat had lifejackets and lifeboats, but due to the sudden capsizing, there was not enough time for people to put on lifejackets or for the signals to be sent out," Zhong said.

More than 200 divers were on hand Wednesday, working in shifts virtually around-the-clock as part of a last-ditch attempt to find survivors, the last of which was found Tuesday afternoon.

Transport Ministry spokesman Xu Chengguang said divers would search the ship for as long as possible.

"Until all hope is lost and more accurate information becomes available, we will not give up on our final efforts, although I know that our colleagues at the scene are facing a great many difficulties," Xu told reporters.

Access to the site was blocked by police and paramilitary troops stationed along the Yangtze embankment, and local Communist Party officials and the Foreign Ministry organized a boat trip for about four dozen journalists to a location about 100 to 200 meters (yards) from the overturned hull, where they were able to see some of the rescue work.

The rescue and salvage efforts are being run from a massive barge tethered a few kilometers (miles) upstream of the wreckage. Reached through a watery wasteland of flooded crops and trees torn in half by high winds, it was a bustle of activity, as rescuers, paramilitary troops and army and navy specialists arrived and left by smaller boat.

The survivors included the ship's captain and chief engineer, both of whom have been taken into police custody. Some relatives have questioned whether everything was done to ensure the safety of the passengers and have demanded help from officials in Nanjing and Shanghai in unruly scenes that have drawn a heavy police response.

CCTV said most of the passengers were 50 to 80 years old.

The Eastern Star was 251 feet (76.5 meters) long and 36 feet (11 meters) wide, and could carry a maximum of 534 people, CCTV reported. It is owned by the Chongqing Eastern Shipping Corp., which focuses on tourism routes in the popular Three Gorges river canyon region. The company could not be reached for comment.

China's deadliest maritime disaster in recent decades was when the Dashun ferry caught fire and capsized off Shandong province in November 1999, killing about 280.

With nearly 400 people still missing, the Eastern Star disaster could become China's deadliest since the sinking of the SS Kiangya off Shanghai in 1948, which is believed to have killed anywhere from 2,750 to nearly 4,000 people.