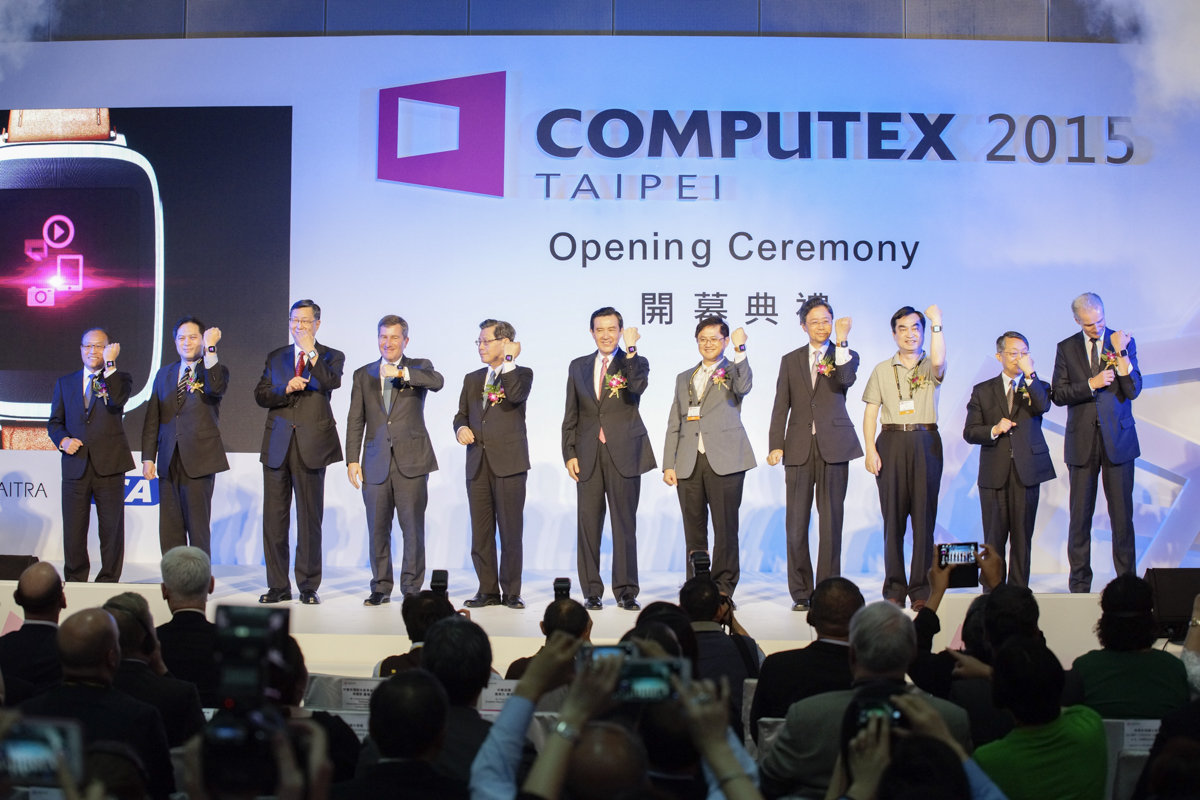 COMPUTEX Taipei 2015 kicked off Tuesday in Taipei as President Ma Ying-jeou presided over the ceremony with an opening speech centered on Taiwan’s burgeoning information and communications technology (ICT) industry and the challenges it currently faces, urging the island’s lawmakers to speed up the process on which Economic Cooperation Framework Agreement (ECFA) has been stalled until now, a Taiwan-China trade agreement signed five years ago.

Ma said the free trade agreement is Taiwan’s bloodline as the nation’s economy is primarily built on export.

In his speech, he said the country needs to open its doors to ECFA and other free trade agreements (FTA) in order to boost competitiveness.

“Taiwan should not leave itself behind,” a quote which the president cited from a foreign report he read recently, adding that it should serve as a reminder to those stalling the island’s economic growth, which has long been surpassed by South Korea.

COMPUTEX Taipei, the largest ICT trade show in Asia and the second largest in the world, is in its 35th edition this year. The event, headed by Taiwan External Trade Development Council (TAITRA) Chairman Francis Liang, brought together important dignitaries and delegates, including Taipei Computer Association (TCA) Chairman T.H. Tung, Deputy Minister of Economic Affairs Cho Shih-chao, and among several others.

For the first time, COMPUTEX has had the privilege to welcome the highest ranking official from the United States to take part in the opening ceremony, Ma said.

Charles H. Rivkin, assistant secretary for the Bureau of Economic and Business Affairs of the Department of State, was among the important delegates at the event. He noted that Taiwan’s rapid ICT industrialization reminded him of “the frog in the well,” an old fable which Taiwanese parents often tell their children to think broader and reach higher. He mentioned the story because “we are all thinking about embracing the future the great potential of the digital economy which Taiwan and COMPUTEX have already done so much to build.”

Rivkin also announced the deepening cooperation between the U.S. and Taiwan through the launching of the “Digital Economy Forum,” which will be a multi-stakeholder platform to give both sides the opportunity to strengthen partnership and coordination on digital trade, innovation and Internet policy issues.

The forum, set to take place in the second half of this year, will include participants from government, academia, civil society, and the private sector.

The aim of the bilateral discussion is to forge an open, secure Internet as widespread as electricity or cellphone coverage itself.

“Reaching that future will require political will and partnerships, and we are so thankful and fortunate to have a friend and like-minded partner in Taiwan,” he said.
The U.S., which has replaced Japan as Taiwan’s second largest trading partner last year, reached US$67.4 billion in bilateral trade in the same period, a figure which Ma said was made up mostly by Taiwan’s technology export.