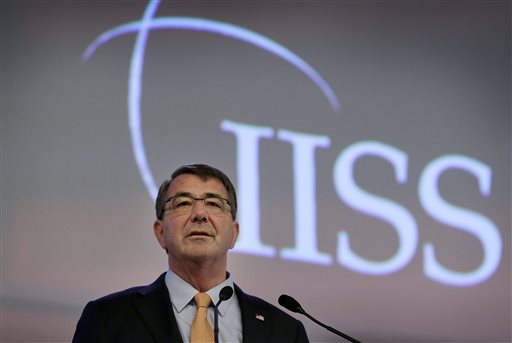 SINGAPORE (AP) — China vigorously defended its South China Sea land reclamation projects in the face of persistent criticism from U.S. leaders at an international security summit Saturday as the standoff in the Asia-Pacific region shows few signs of abating.

U.S. Defense Secretary Ash Carter and other officials sharply condemned the artificial island-building, but provided no details on what steps the U.S. may take to press China into diplomatic talks.

Carter said China's land reclamation was out of step with international rules, and that turning underwater land into airfields would not expand its sovereignty.

He and others said the U.S. opposes "any further militarization" of the disputed lands. That was a reference to two large motorized artillery vehicles that officials said China had placed on one of the artificial islands.

Chinese officials, in public statements and a private meeting, defended the construction and slammed the U.S. for interfering.

David Shear, the assistant U.S. defense secretary for Asian issues, told reporters that a private meeting with Chinese Rear Adm. Guan Youfei, the chief of foreign affairs at the defense ministry, was "spirited and candid."

At the conference, U.S. senators and officials from other Pacific nations questioned whether the U.S. would take action.

Carter and other officials, including Adm. Harry Harris, who just took over U.S. Pacific Command, declined to talk about what diplomatic or military steps the U.S. would be willing to take.

U.S. Sen. John McCain, chairman of the Senate Armed Services Committee, said the U.S. should not invite China to a major military exercise in the Pacific in 2016. But Harris said China has already been invited, and that the two countries must engage if they are to build a better relationship and lessen the chances for misunderstandings.

But, he said, "we always have the option of changing our approach."

He also said he was concerned by the artillery weapons, which were discovered at least several weeks ago. Two U.S. officials who are familiar with intelligence about the vehicles say they have been removed. The officials weren't authorized to discuss the intelligence and spoke only on condition of anonymity.

The Pentagon would not release any photos to support its contention that the vehicles were there.

China's assertive behavior in the South China Sea has become an increasingly sore point in relations with the United States, even as President Barack Obama and China's President Xi Jinping have tried to deepen cooperation in other areas, such as climate change.

"Turning an underwater rock into an airfield simply does not afford the rights of sovereignty or permit restrictions on international air or maritime transit," Carter told the audience at the International Institute for Strategic Studies summit.

China's actions have been "reasonable and justified," said Senior Col. Zhao Xiaozhuo, deputy director of the Center on China-America Defense Relations at the People's Liberation Army's Academy of Military Science.

Zhao challenged Carter, asking whether America's criticism of China and its military reconnaissance activities in the South China Sea "help to resolve the disputes" and maintain peace and stability in the region.

Carter responded that China's expanding land reclamation projects are unprecedented in scale. He said the U.S. has been flying and operating ships in the region for decades and has no intention of stopping.

While Carter's criticism was aimed largely at China, he made it clear that other nations who are doing smaller land reclamation projects also must stop.

One of those countries is Vietnam, which Carter is scheduled to visit during this 11-day trip across Asia. Others are Malaysia, the Philippines and Taiwan.

Carter said the U.S. will continue to sail, fly and operate in the region, and warned that the Pentagon will be sending its "best platforms and people" to the Asia-Pacific. Those would include, he said, new high-tech submarines, surveillance aircraft, the stealth destroyer and new aircraft carrier-based early-warning aircraft.

One senior U.S. defense official has said the U.S. was considering more military flights and patrols closer to the projects in the South China Sea, to emphasize reclaimed lands are not China's territorial waters.

Officials also are looking at ways to adjust the military exercises in the region to increase U.S. presence if needed. That official was not authorized to discuss the options publicly and spoke on condition of anonymity.

One possibility would be for U.S. ships to travel within 12 miles of the artificial islands, to further make the point that they are not sovereign Chinese land.