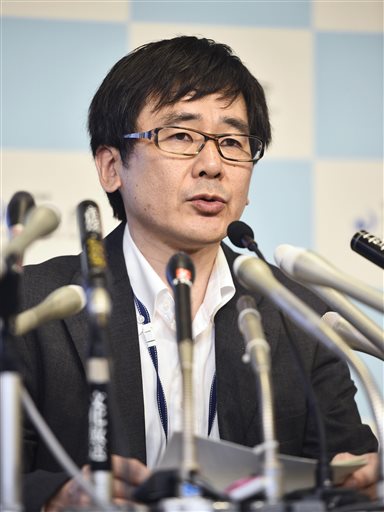 TOKYO (AP) — A powerful earthquake struck near remote Japanese islands and shook most of the country Saturday evening, but it occurred well beneath the earth's surface and did not trigger a tsunami warning. Several people suffered non-life-threatening injuries, and there were no reports of deaths or major damage.

The magnitude-8.5 offshore quake struck off the Ogasawara islands at a depth of 590 kilometers (370 miles), the Japan Meteorological Agency said. The U.S. Geological Survey said the quake had a magnitude of 7.8 and a depth of 678 kilometers (421 miles).

The temblor was powerful enough to rattle most of Japan, from the southern islands of Okinawa to Hokkaido in the north. It caused buildings to sway in Tokyo — about 1,000 kilometers (620 miles) north of the Ogasawara islands — and temporarily disrupted some train services in the city. About 400 houses in Saitama prefecture, just north of the capital, were without power, according to the Tokyo Electric Power Co.

On Sunday morning, a strong magnitude-6.4 earthquake struck off of Japan's Izu islands, which are north of the Ogasawara islands, the U.S. Geological Survey said. It struck at a depth of eight miles (13 kilometers) with its epicenter 390 miles (630 kilometers) south-southeast of Tokyo.

The earthquake was not strong enough to generate a tsunami warning or close enough to the islands to cause any significant damage or injuries, said John Bellini, a geophysicist with the U.S.G.S. in Golden, Colorado. He said it is considered a separate seismic event and not an aftershock to the magnitude-8.5 quake that struck hours earlier.

Late Saturday, at Tokyo's Roppongi Hills shopping and business complex, elevators stopped soon after the magnitude-8.5 earthquake struck the area, forcing hundreds of visitors to climb down the stairs. Among them were about 200 people who came to see the Star Wars exhibit on the 52nd floor.

In Saitama, a woman in her 70s sustained a minor head injury when a ceramic plate fell from a cupboard, local police said. In Kawasaki, just south of Tokyo, a 56-year-old office worker fell down when the quake caught him by surprise and suffered a rib injury, according to Japanese public broadcaster NHK.

Yoshiyuki Sasamoto, a municipal official on Chichijima island, which is part of the Ogasawara island group, told NHK that he initially felt a mild tremor, but when he thought it was over "there was a violent shaking and I couldn't even stand on my feet."

At an inn on the Ogasawara island of Hahajima, furniture shook violently, although nothing fell or broke, innkeeper Michiko Orita told NHK. "It was so frightening. The entire house shook and a Buddhist altar violently swayed like I have never experienced before," she said, adding that all her guests were safe.

The meteorological agency did not issue a tsunami warning because the quake struck so far beneath the earth's surface. Deep offshore earthquakes usually do not cause tsunamis, and generally cause less damage than shallow ones.

In March 2011, a magnitude-9.0 earthquake rocked northeastern Japan, triggering a tsunami that killed more than 18,500 people and ravaged much of the northern Pacific coast. The depth of that quake was just 24 kilometers (15 miles), according to the meteorological agency.