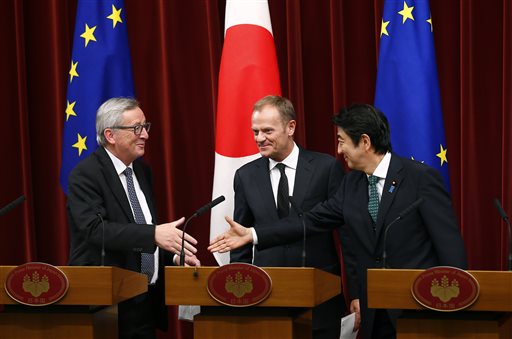 TOKYO (AP) — Japanese and European leaders agreed Friday to step up defense and economic ties, and expressed concern about rising tensions in the South China Sea.

After its defeat in World War II, Japan renounced war under its U.S.-drafted constitution that essentially limits the use of force to self-defense. Earlier this month, the Cabinet endorsed a set of defense bills that would allow the military to operate under a broader definition of self-defense and play a greater role internationally, a plan that has split public opinion.

The three leaders expressed concern about rising territorial tensions in the South China and East China seas, and stressed the importance of the rule of law and peaceful solutions to maritime disputes.

"We continue to observe the situation in the East and South China Sea and are concerned by any unilateral actions that change the status quo and increase tensions," they said in a joint statement. "Mindful of the uncertainties in the regional security environment, we condemn all violations of international law and of the principles of sovereignty and territorial integrity of states."

China has been creating several artificial islands in areas it claims in the South China Sea. U.S. officials said Friday that two large artillery vehicles were detected on one of the islands, furthering concerns that China may plan to use the islands for military purposes.

The Japanese and European leaders urged all parties to seek peaceful and constructive roles and install crisis management mechanisms such as direct communication lines.

They also agreed to play a leading role in the global effort to fight climate change, and expressed hope that they can conclude a free trade agreement as early as the end of this year.