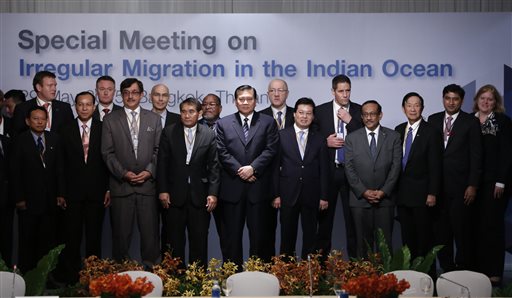 BANGKOK (AP) — A regional meeting called to address the swelling tide of boat people in Southeast Asia began Friday with a defensive Myanmar official criticizing those who blame his country for causing the crisis, saying "finger pointing" would not help.

Htin Linn, the acting director of Myanmar's Foreign Affairs Ministry, spoke after several officials urged delegates to address the root causes of the problem — a reference to minority Rohingya Muslim refugees who have fled persecution in predominantly Buddhist Myanmar for years.

Asian nations have been struggling in the face of growing waves of desperate migrants who are landing on the shores of Indonesia, Malaysia and Thailand in growing numbers. In the last few weeks alone, at least 3,000 people have washed ashore or been rescued by fishermen, and several thousand more are believed to still be at sea after human smugglers abandoned boats amid a regional crackdown.

Some are Bangladeshis who left their impoverished homeland in hope of finding jobs abroad. But many are Rohingya who have fled persecution in Myanmar, which has denied them basic rights, confined more than 100,000 to camps and denies them citizenship. There are more than 1 million Rohingya living in the country formerly known as Burma.

Volker Turk, the U.N.'s Assistant High Commissioner for Refugees, said there could be no solution if root causes were not addressed.

"This will require full assumption of responsibility by Myanmar toward all its people. Granting citizenship is the ultimate goal," he said. "In the interim ... recognizing that Myanmar is their own country is urgently required (as well as) access to identity documents and the removal of restrictions on basic freedoms."

Htin Linn shot back in a speech afterward, saying Turk should "be more informed" and casting doubt on whether "the spirit of cooperation is prevailing in the room."

"Finger pointing will to serve any purpose. It will take us nowhere," he said.

Friday's meeting includes representatives from 17 countries directly and indirectly affected by crisis, as well as the United States and Japan, and officials from international organizations such as the U.N. refugee agency and the International Organization for Migration.

Southeast Asian governments have largely ignored the issue for years. The problem has recently attracted international attention amid increased media scrutiny in recent months as more migrants and refugees pour out of the Bay of Bengal. In many cases, they pay human smugglers thousands of dollars for passage to another country, but are instead held for weeks or months, while traffickers extort more money from families back home. Rights groups say some migrants have been beaten to death.

Human rights groups have urged those involved in the talks to find a better way of saving the people still stranded at sea, and to put pressure on Myanmar to end its repressive policies that drive Rohingya to flee.

The director-general of the IOM, William Lacy Swing, said Thursday that a long-term, comprehensive policy has to be put together, and that no single element is going to solve the issue. He added, "I think Myanmar has to be engaged in any solution involving any of the groups, absolutely."

Speaking at the start of Friday's conference, Thai Foreign Minister Thanasak Patimaprakorn said that "no country can solve this problem alone."

Thailand launched a crackdown on human trafficking last month, prompting smugglers to abandon their boats. Survivors, including women and children, came ashore with first-hand accounts of beatings, ransom kidnappings by traffickers and near-starvation.

Anne C. Richard, the U.S. assistant secretary of state for population, refugees and migration, said "we strongly believe we have to save lives urgently. We have to develop better ways of discussing and meeting on these issues and taking action when people are setting to sea in boats."

Malaysia and Indonesia agreed last week to provide Rohingya with shelter for one year. It is unclear what happens after a year, though both countries have called on the international community to help with resettlement.

Thailand has offered humanitarian help but not shelter. More than 100,000 refugees, mostly from other Myanmar ethnic groups, have been living in Thai border camps for decades, and Thailand says it cannot afford any more.

The U.S. has flown five surveillance flights in the region so far, trying to find migrants at sea. But Pentagon spokeswoman Henrietta Levin said only one possible vessel carrying migrants had been spotted so far — a boat with about 11 people visible on deck on Monday. It was not immediately clear what happened to the boat.

U.S. Navy flights are operating daily out of Subang, Malaysia. Richards said the U.S. had put in a request to Thailand to allow aircraft to fly out of there, but "we have yet to get the approval we seek."